North Stanly advances in playoffs with win over South Stanly 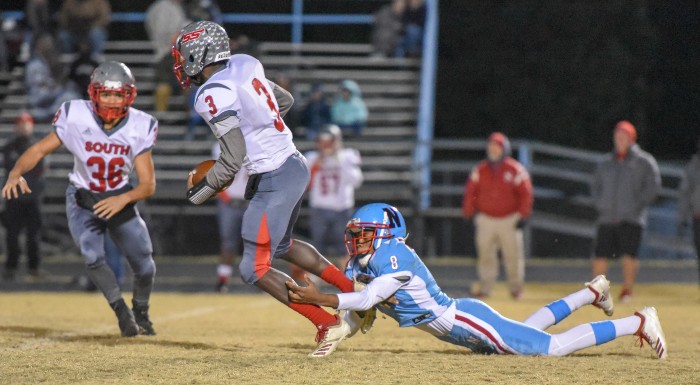 Friday’s 1AA East Region playoff game between North and South Stanly saw the No. 7 Comets take the lead back early from the 10th-seeded Rebel Bulls early and never trail the rest of the way, winning 50-20.

Cooke had a big night rushing for South Stanly (5-7) with 222 net rushing yards and three touchdowns, the first of which came on the first offensive play of the game.

North answered with a 69-yard TD run from Christian Barber three minutes later to put the Comets up, 7-6. Barber finished the game with 220 net rushing yards on 21 carries with four TDs.

The score stayed the same until the final minutes of the first half. Cooper Hogan picked off a Cooke pass and returned it to the South 33. Seven plays later, Barber scored from four yards out and the extra point put the Comets up by eight at halftime, 14-6.

North came out throwing the football in the second half, the first pass from Luke Shaver going to Joseph Benfield for a 52-yard touchdown.

“That touchdown gave us momentum. It really boosted our confidence,” Benfield said, adding the team regrouped in the locker room at halftime.

North head coach Scott Crisco credited his assistant for adjusting the game plan at halftime to go to the air more.

“They made good adjustments. We knew the middle would be open and we tried to soften up that zone for us,” Crisco said.

North added another touchdown then a bad snap for South which went through the end zone gave the Comets a safety.

The Comets added two late touchdowns from Barber and Kyree Dykes while Cooke scored his final TD for South with a 63-yard fourth-quarter TD run.

The win puts the Comets on the road Friday for a four-hour trip to Edenton to face the undefeated No. 3 Holmes Aces (10-0).

Giving the team and its seniors another game, Benfield said, was important.

“It’s very important to us. Everybody counted us out this year. I love it. It’s great.”