West Stanly falls to Owen in first round of the playoffs 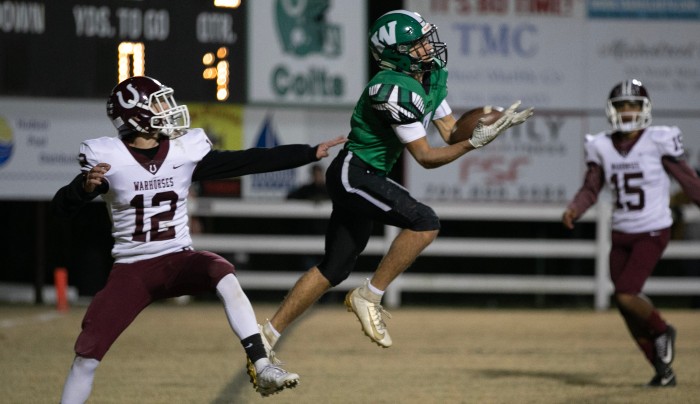 Will Barbee hauls in a 15-yard pass for a TD in West's home playoff game Friday night. (Photo by Brandon Morton)

An inauspicious start for the West Stanly Colts in the first round of the 2A football playoffs Friday night against the Charles D. Owen Warhorses saw the Colts fumble the opening kickoff en route to a 27-7 loss.

Owen cashed in a few plays later with a four-yard touchdown pass from Caleb Scott to Fred Graves, making it 7-0.

Owen’s staunch defense held West Stanly’s offense in check during the game to advance to the second round of the playoffs.

“Hats off to Owen, they played really hard,” Morton added.

West had a promising first drive deep in Owen territory thanks to several nice Braden Hartsell runs but a failed fourth-down pass ended the Colts’ threat.

“We did good enough on defense but we didn’t find a way to score early in the game the way we should,” Morton said.

He noted that fumbles, penalties and lack of execution really hurt his team.

In what was a defensive battle in the first half, Owen added to its lead with a 40-yard TD pass from Scott to Graves late in the first quarter, making the score 14-0.

Neither team scored in the second quarter.

Owen scored early in the third with a wide open 29-yard TD pass from Scott to Graves, making it a 21-0 ball game.

After a West fumble in the fourth, Owen capitalized with a one-yard TD run from Dequan Boyce to put the Warhorses up 27.

Though West moved the ball at times, they could never consistently sustain a quality drive until the final minute of the game.

With less than 30 seconds left, Colts quarterback Jordan Manshack found Will Barbee in the end zone for a 15-yard TD pass for the final score.

A bright spot for the Colts was Braden Hartsell, who rushed for 140 yards on 23 carries. Manshack finished the game 2-for-9 for 46 passing yards and the TD to Barbee.

West started the year 8-0 before losing junior running back Jordan Poole, who accounted for 200 all-purpose yards per game, to a shoulder injury in the team’s win over Montgomery Central in October.

The team went on to lose its final two games of the regular season.

Morton added 8-3 is a good year but was not the season the team had envisioned.

Owen (7-4) will take on Mountain Heritage next Friday.