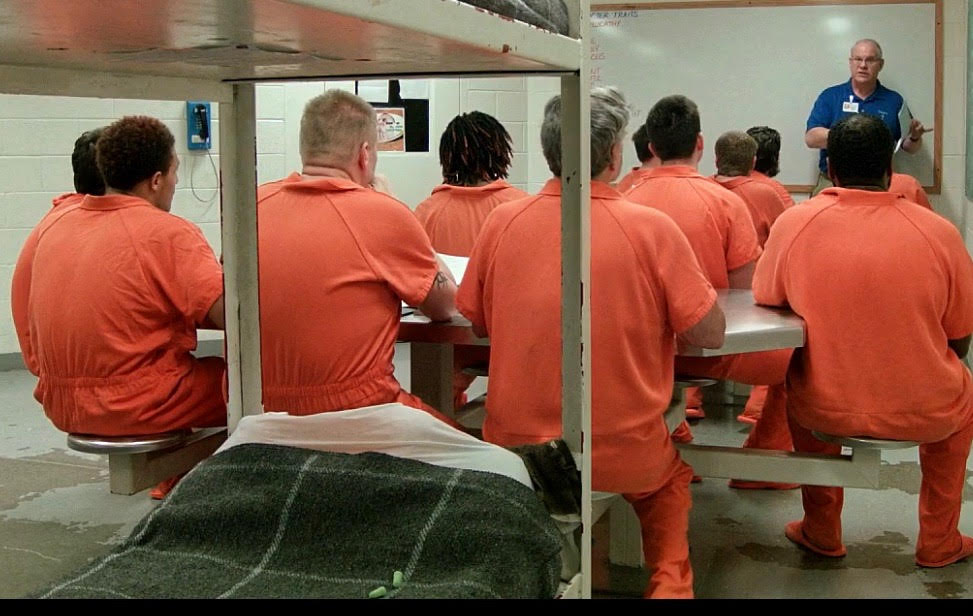 Chaplain Vic Weaver speaks to a group of inmates as part of the Life Skills program.

The Stanly County Detention Center has implemented a new life skills program in the county jail to help prepare inmates for release.

Many of the inmates in the program are struggling with substance abuse.

“We’re going to fight the opioid crisis from the inside,” executive director and former pastor Daryl Oliver said. “We want to help these people transition back into the community.”

Oliver said the rate at which inmates are convicted after they leave jail is about 50 percent for people who do not go through the program. For those that do, that rate drops down to 15 percent.

“That means about 85 percent of the people who come to our class do not return,” Oliver said.

Safer Communities Ministry has conducted the program for 33 years in Union County. Oliver estimates his program has saved the county $1.8 million because of the reduction in repeat offenders.

Oliver said though it’s a “Christ-centered program,” any person from any religion can take part in the program.

The program is also in Anson and Richmond counties.

Sheriff Jeff Crisco first learned about the program from Union County Sheriff Eddie Cathey. He said the program will cost $40,000 a year.

Crisco said he has already received letters from inmates thanking him for bringing the program to Stanly.

“To me, if we can change one person’s life, it’s well worth it,” Crisco said, “because then that one person will go out into the public and talk to their friends and hopefully change them.”

County Commissioner Zach Almond, who knew about the program in Union County, also helped bring the program to Stanly.

“The work that Daryl and the team at Safer Communities is doing has been instrumental in combating the opioid crisis in other counties,” Almond said. “In particular the success they have had in Union County is what made me want to be a voice for the program on the commission board.”

The program is taught at the county jail 8 a.m. to noon Monday through Thursday. There are classes for both men and women.

The inmates have to apply to get into the program.

The inmates work with licensed pastors who lead the classes and also complete assignments in their American Community Correctional Institute workbooks. They take a final written examination before receiving their certificate for completing the program.

Oliver said the program partners with different people and organizations in the community. NC Works, for example, teaches inmates how to get a job once they leave the jail.

After the inmates graduate from the program and leave the jail, SCM helps them get into transitional living houses and into detox and treatment programs. SCM also has addiction recovery meetings at Prospect Baptist Church in Albemarle at 6:30 p.m. every Tuesday and Celebrate Recovery meetings at the Life Change Group building in Albemarle on Friday nights. These programs are available to everyone in the community.

The inmates also have mentors who work with them once they graduate and leave the jail.

Oliver said the program is looking for churches and organizations to help volunteer.

Many of the inmates at the beginning of the program have self-defeating thoughts, and don’t fully value themselves, he said.

“They’ve been scripted that way by society,” Oliver said. “And our job is to come alongside them and tell them that God loves them and cares for them and he has a plan, purpose and future for their lives.”

The people who have participated are grateful for the program.

“This class has brought me closer to God and taught me that I do have a purpose in life,” wrote Susan Jackson. “I will now be able to effectively apply new skills I have learned to get a job once my time in incarceration is over.”

Cristy Hatcher wrote that through the class, “I have changed my negative thought process to positive, learned how to control my anger, have better relationships and worked on cognitive awareness.

Minda Slack wrote that she had “been in and out (of jail) a few times since 2015 for drugs,” but the program “opened new doors for me.” She said she could have left the jail “weeks before the class ended,” but she told her mom she wanted to wait and remain in jail to “see the class through.”

Oliver said Slack got out of jail Oct. 7, was in an addiction recovery meeting the next day and was then able to get a painting job.