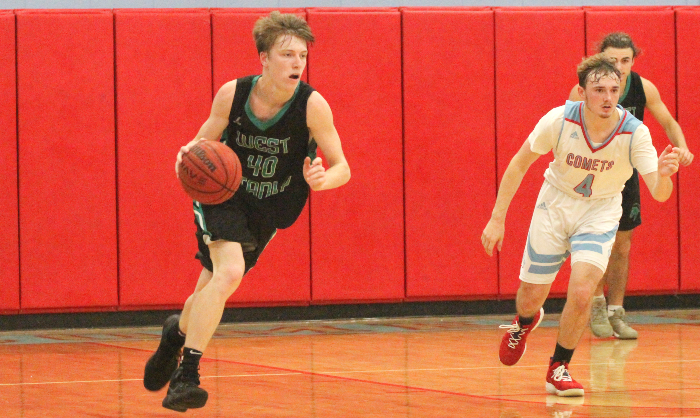 The basketball season opened for the teams of West and North Stanly tonight in New London where the Colts earned a 55-46 win.

Austin Medlin led West with 24 points, 12 coming in the fourth quarter. He shot 7-of-8 in the game from the free-throw line, hitting 5-of-6 foul shots in the fourth.

West head coach John Thompson said Medlin is working on getting stronger in the weight room and on his game.

“He still has to be a better decision maker on when to take it to the hole but he was not the only one,” Thompson said.

West’s coach said the Colts were impatient on offense not knowing whether it was due to nerves for the first game or playing in a rivalry game.

“We did not do a good job of focusing our energy all the time. It’s a win on the road against a rival. We’ll take that and hopefully move on and get better,” Thompson said.

“It was a good team win but we did not play near to what we are capable of,” Medlin said. He added the Colts moved the ball better in the second half.

North Stanly (0-1) was missing six players from the basketball lineup who are still playing football for the Comets. Koby Poole led North with 21 points while Clay Hatley added 15 points including 5-of-7 at the foul line.

The Colts opened the game with an 11-3 run and outscored the Comets three out of four quarters, leading by six at halftime and after three quarters.

West Stanly returns to the court Thursday at Piedmont while the Comets will not play until a rematch with the Colts in Red Cross Dec. 2.