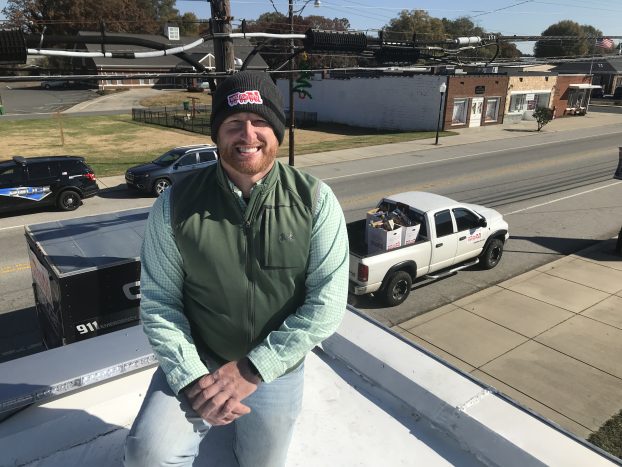 Oakboro Police Chief T.J. Smith stood on the roof of the NAPA/Butch's Auto Parts building while toys were collected for the Toys for Tots event in 2019.

Oakboro Police Chief T.J. Smith spent the majority of Wednesday on the roof of the NAPA/Butch’s Auto Parts building. And he wanted it no other way.

The Oakboro Police Department teamed up with the Marine Corps League for the second annual Stanly County Toys for Tots program. Businesses in Oakboro, Albemarle, Locust, Norwood and Richfield are collecting toys that will be distributed to children for Christmas. The program runs until Dec. 15.

Toys for Tots is accepting new, unwrapped toys and bicycles as well as cash and check donations, which can be made online.

The national program, run by the U.S. Marines Corps Reserve, began in 1947 and has distributed 566 million toys to 258 million children across the country, according to its website.

Smith, who first got on the roof at 6:15 a.m., stayed until the Oakboro Police pick-up truck was filled with boxes of toys.

To pass the time, Smith listened to Christmas music and waved at everyone that drove or walked by.

Once the toys were collected, the Marine Corps League passed them along to Stanly Community Christian Ministry, West Stanly Christian Ministries and Coalition for Christ to distribute them to children in the county, William “Tim” Pressley, coordinator for Toys for Tots in Stanly, said. 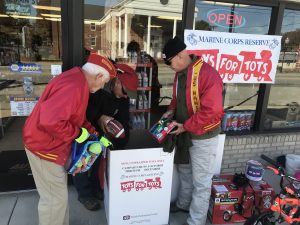 “We tried it last year and it was a great success,” Oakboro Police Lt. Mark Shue said.

Last year, 17 boxes of toys and 16 bicycles were donated throughout the county.

The program “helps those who are underprivileged in our community,” Smith said. “I’m very honored to be a part of it. If it wasn’t for the community, we wouldn’t be able to do this.”

For more information about the event and participating businesses, visit badin-nc.toysfortots.org.