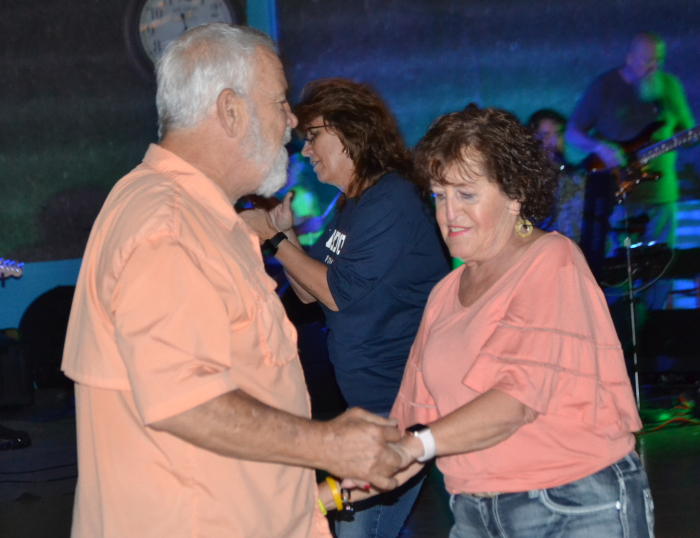 Steve Lambeth dances with his wife Margaret Hawks. They came to Country Underground from Thomasville because of the band, The SkyRyder Experience.

Behind the old bowling alley on East Main Street in Albemarle lies a hidden gem — the Country Underground dance hall, which opened a few months ago.

Created by Walter Griffin, the dance hall is a hotspot for people looking for something fun to do on the weekend.

Originally from Monroe, Griffin lived in Oklahoma before moving to Stanly a few years ago. Here he met a woman who introduced him to dancing.

After the previous dance hall locations in Albemarle and Stanfield recently closed, Griffin actively searched for a new place for a dance hall.

“Everybody kept saying, ‘God I wish we had something to do on Saturday night,’ ” he said.

After months of searching, Griffin discovered the space behind the bowling alley in July. He said the space used to be an old bingo parlor. 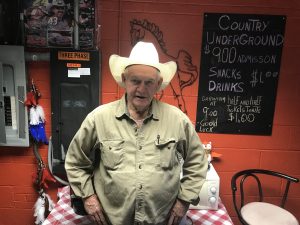 Admission costs $9 and snacks and drinks are offered for $1 each.

Bands from around the region perform each night and Griffin already has the hall booked with live performances through the rest of the year.

Though people can dance however they like, the most common styles are line dancing and the two-step.

Griffin continually works to improve the space throughout the week, cleaning and painting and getting it ready for the 40 to 50 dancers that regularly show during the two nights.

The hall is a simple space — plenty of chairs and tables line the outside edges of the room, while the rest of the area, bedecked with hanging lights, is reserved for dancing.

Many of the same people show up each week to dance and socialize with friends.

Jeff Barnes and his fiancé Margie Dunn come to the hall every Friday and Saturday.

“He has the best bands and the best music around,” Barnes said, adding that he enjoys slow dancing.

“Every chance I can get here I’m here,” he said.

Steve Lambeth and his wife Margaret Hawks came from Thomasville to the hall recently because of the band, The SkyRyder Experience.

Griffin, donning his trademark cowboy hat, enjoys meeting and talking with the people as they come in.

“I go from table to table,” he said. “I talk to everybody, I shake everybody’s hands and let them know I appreciate them. It’s the people is what I actually like. Some of the finest people in the world come through here.