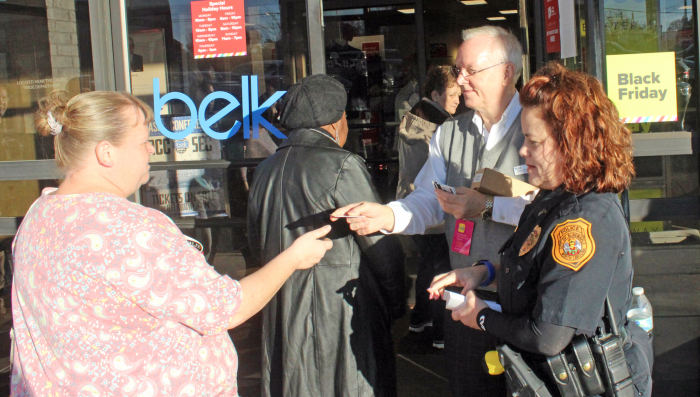 For many people, the Thanksgiving holiday is not just about eating turkey, watching football and reconnecting with family — it’s also about racing to find the best deals.

Whether waiting in line at a favorite retail store Thanksgiving evening, or getting up at the crack of dawn the next day, Black Friday has become an unofficial holiday and a prelude to the Christmas season.

Hordes of people, their bellies satisfied with turkey and stuffing, lined up outside Belk Thanksgiving evening while others fled to Walmart. Belk store manager Don Robinson and Albemarle police officer Kim Cook handed out gift cards to the first 200 people that entered the department store. 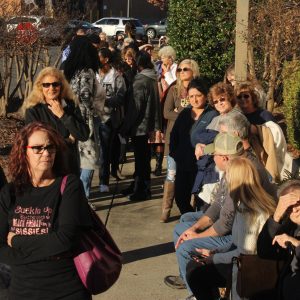 Walmart associate Laketa Graham said the busiest time for shoppers was Thursday from 6 p.m. until 8 p.m. She said the most popular item has been TVs.

Ryan Russell of Norwood decided to wait until Friday morning to go to Walmart, where he bought a TV. He said he was surprised by how few people were at the store.

Manda Harkey and her husband, who live in New London, got a few items at Walmart, including rabbit food, though she did most of her shopping online. They also had already been to Belk and Lowe’s.

Harkey, who has shopped on Black Friday for at least 10 years, likes to shop to save money.

One place that was quite busy Friday morning was Lowe’s Home Improvement, which opened at 6 a.m. Around 100 people were waiting outside in anticipation of the opening. Refreshments, including doughnuts, were offered as people walked in.

Ricky Stuart, a customer service associate at Lowe’s, said it’s important for employees to have a game plan and know where prized items are located so they can better help the customers, who will likely bombard them with questions.

He said some of the popular Black Friday items include pre-lit garlands, poinsettias and artificial Christmas trees, which were 25 percent off.

Donna Andrufski came to Lowe’s to buy poinsettias and a small rosemary tree.

Her favorite part of Black Friday shopping is the discounts and the crowds.

Andrufski said her mother’s favorite thing during Black Friday is to sit in a mall and “just watch the chaos.”

Albemarle residents Cathy and Jeff Hartsell, who were at Lowe’s looking for an air hose, devised a game plan before they started shopping. She said they laid out all of the Black Friday ads in the newspaper to plot out what items they wanted and then scoped the stores in advance to see where the items were located.

For years, Cathy would go Black Friday shopping with her sister or his sister, but never with Jeff. About 10 years ago, she convinced him to come with her and she said he was hooked.

Cathy said it’s good to shop with a team because more ground can get covered and it’s more efficient when multiple people wait in line.

Jeff Hudspeth of Norwood has shopped on Black Friday for the past 11 years. This year, he went to Lowe’s, Harbor Freight and Tractor Supply.

He came to Lowe’s early Friday morning and got a 12-gallon vacuum cleaner on sale along with a few locks and some containers.

“You gotta be here early, the early bird gets the worm,” he said.

He and his wife also said they got good deals Thursday night at the Walmart in Locust and Belk. He said they probably saved around $500.