Since 2011, Whitley has been part of Sweet Potato Pie, an all-female North Carolina-based band, known for its unique sound, referred to as “sweetgrass” — a blend of Americana, bluegrass, country and gospel.

Whitley said the group is known for its entertaining shows and distinct harmonies.

Originally formed in 2000 by Stead, Sweet Potato Pie is the longest running all-female band in the country, Whitley said.

Whitley grew up in a musical family — her father taught her and her sisters how to play instruments and sing. She and her family still play at local events throughout the county. 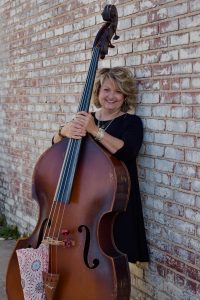 Sweet Potato Pie practices each week in Seagrove and performs all around the state and in other areas along the East Coast and Midwest. In December, the group has four performances, three of which are in North Carolina.

“We travel around wherever we can get somewhere to play,” she said.

One of those December performances promises to be memorable. They will be playing Christmas songs at the White House Saturday as part of its Holiday Open House, a private event hosted by the Executive Office of the President. Stead sent in an application, complete with a video of the group’s Christmas show last year.

When the band first found out that they would be performing at the White House, “we thought it was a hoax,” Whitley said.

The band has released eight albums, with the most recent, “Bittersweet,” being released this year. The album, which focuses on how life is a journey filled with ups and downs, has 10 songs including many originals.

Her favorite part of being in the band is the camaraderie and support that exists between the members.

“All of us get along really well which is kind of essential,” she said. “We all do what’s best for the band to make the music sound best. We all just love each other like sisters.”

As for the unique name?

After the band was initially formed Stead, who was pregnant at the time, was always hungry. After numerous choices, the name sweet potato pie was chosen as the band’s name over stump slung chitlins, Whitley said. She said Stead wanted a name “that made you smile.”

An added bonus of the name: The band is sponsored by the N.C. Sweet Potato Growers and according to the group’s website, their music was selected in 2015 for use in elementary classrooms to teach students about North Carolina’s agricultural crops. Sweet Potato Pie’s performance style and music is also featured in high school music curriculum across the state.