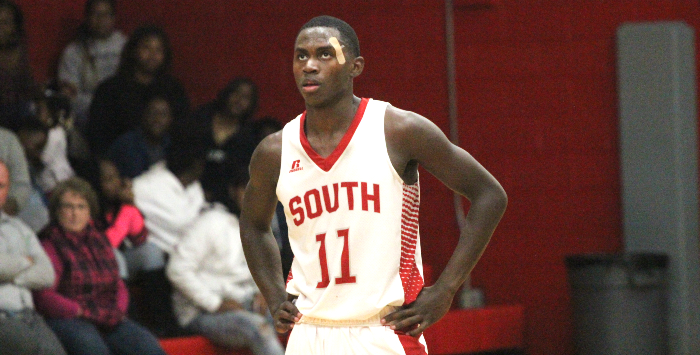 Jaquez Cooke looks up to the scoreboard wearing a bandage on his face after suffering an injury in the third quarter of Wednesday's home game. (Photo by Charles Curcio)

South Stanly guard Jaquez Cooke overcame a shot to the head in Wednesday’s non-conference home game against Montgomery Central, spurring a late rally which came up short in a 94-76 loss to the Timberwolves.

Q.J. Drake had a big night for Montgomery Central (1-3) with 40 points while Keshawn Ingram added 21. Drake hit 16 field goals in the game, including three 3-pointers, and was 5-of-9 at the foul line.

The Timberwolves built an early lead spurred on by a Drake breakaway one-hand jam. Montgomery Central led after one quarter, 21-13.

South got as close as three points in the game on a Gaddy 3-pointer in the final 30 seconds of the first half.

Montgomery Central pushed the lead back to seven at halftime, 40-33, connecting seven times from long distance in the first 16 minutes.

The scary moment for South came late in the third quarter when Cooke took a shot to the face while going up for a rebound. He left the game with a small cut over his left eye but returned several minutes later.

“I was proud of our guys when Quez went out. Probably half the stands put their heads down and said ‘Oh, no.’ But our guys picked their heads up and said ‘Next man up,'” South head coach Sean Whitley said.

South did not go away late getting within six on a Teller 3-pointer with just over five minutes left in the final period. The Timberwolves pushed the lead back out to double digits en route to the win.

“You can’t say enough about Quez. He might be the leading scorer or rebounder but he will be there in every stat category. He makes us go,” Whitley said.

South’s head coach also credited Gaddy’s play early this season, saying he has a different role this season from shooting outside last year to more driving to the hoop.