After Stanly and Montgomery counties merged to form one judicial district over a year ago, an election for a second Superior Court judge will take place next November.

While the filing period for partisan offices began Monday, only one candidate has filed so far for the new Superior Court judgeship. Republican Pat Nadolski, who’s currently the Montgomery County assistant district attorney, filed Monday to run for the new position. 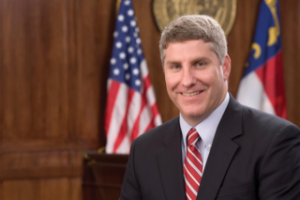 “It think it’s just a natural progression as a prosecutor in public service to continue on as a judge,” he said.

Nadolski has been an attorney for 17 years. He was actually an assistant district attorney in Stanly for about four years in the early 2000s. He also served several years in the Army.

He said he has unique experience based on his time as a trial lawyer, where he’s “tried everything from capital murder to larceny to robbery to rape.”

According to his November press release announcing his bid for the judgeship, “I want to make sure our courts are run efficiently and effectively in order to save hard-earned taxpayer dollars. I want to be a Conservative, fair and impartial judge.”

Nadolski currently lives in Mount Gilead and he has three children.

Clodfelter said another judge in the district will help “with the continually increasing Superior Court docket” including things like issuing search warrants, helping with bond hearings and other common duties judges preside over.

Superior Court judges hear cases involving felony crimes, civil cases involving $25,000 or more, and appeals from district courts. Every six months, superior court judges rotate among the districts within their divisions. Stanly and Montgomery are part of the third division, which encompasses 15 counties stretching from Union in the western part of the state all the way to Wake and Johnston counties. The rotation system is provided for by the state constitution and designed to minimize conflicts of interest that might result from having a permanent judge in one district.

House Bill 717–which was sponsored by former N.C. Rep. Justin Burr in 2017 and enacted into law a year later–merged Montgomery, with a population of around 27,000 with Stanly and its population of roughly 61,000. Montgomery previously shared a district with Randolph, which has a much larger population of approximately 143,000 as of 2017.