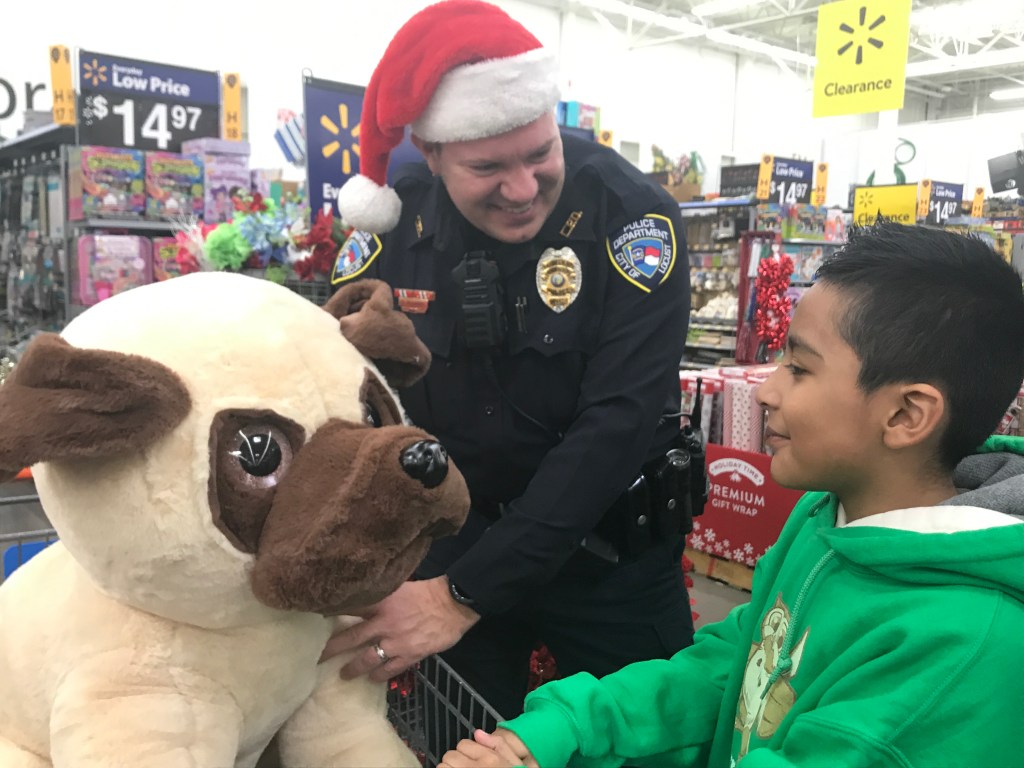 Six-year-old Ezra May was having a blast playfully attacking police officers with a yellow toy sword Saturday morning at the Locust Walmart. The officers happily played along and even started attacking him. It was all in good, festive fun.

May was one of roughly 20 children around the western Stanly area that participated in the Shop With a Cop program with local officers. The goal is to foster positive relationships between the youth and police. This is the fifth year the program — which takes place all across the country — has been in Locust. 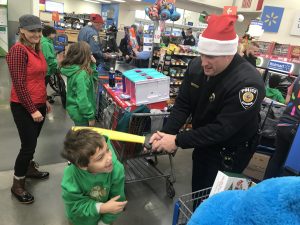 The children, kindergarten through fifth grade, are selected from Locust, Oakboro and Stanfield elementary schools through an application process with the assistance of teachers and guidance counselors.

The officers first treated the kids to a breakfast provided by Bojangles at the Locust Community Center. After each officer was assigned a child, they all went to Walmart to pick out clothes and toys for the kids for Christmas.

Each child had the same amount to spend, thanks to money raised from local businesses, citizens and a community grant from Walmart, said Locust Police Sgt. Kevin R. O’Connor, who helped coordinate the program.

O’Connor said he was inspired to start a Shop With a Cop program in Locust after participating in a similar event in Badin several years ago.

“The best part of this whole thing is seeing the change in the kids from the minute they walk in the door in the morning and don’t know what to expect and they’re nervous and they’re kind of intimidated by all these guys in these uniforms and then at the end of the day we’re best friends and high-fiving,” O’Connor said.

Oakboro Police Chief T.J. Smith said the program reminds many of the officers what it was like when they received gifts as kids around Christmas.

“It almost takes you back to your childhood when you got to run out of your bedroom to see what was under the tree,” Smith said.

CMPD officer Jordan Williams was volunteering his time at the program for the third year. He said it’s great for officers from different areas to network and get to know each other.

“You just get to see how other people do things and how things operate in other places,” Williams said.

“It’s fun getting to know the kids and helping them shop,” he added.

He said it is good preparation for if he ever has a child.

Ten-year-old Ta’marion Mathis, who attends Locust Elementary, said he had “a lot of fun” shopping and interacting with the officers. His toys included an NFL Madden Xbox video game, football, beyblades toys and a scooter. He also got some boots.

His favorite part of the program was hanging out with and talking to the police officers. 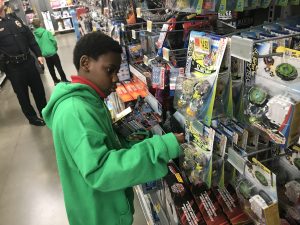 Each child also received a #warriorjace sweatshirt, as a tribute to Jace Thompson, a young boy who passed away last year. The sweatshirts were provided by the Shop With A Cop program and printed by Bondo Innovations in Locust, O’Connor said.