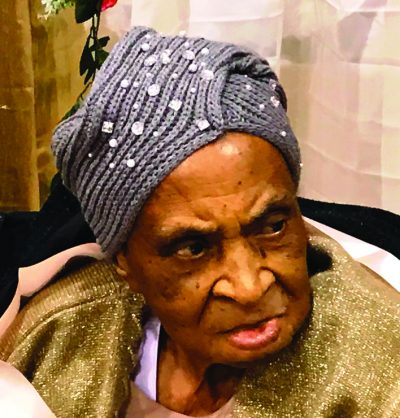 A 100th birthday celebration for Grace Pegues on Saturday was held at the Albemarle Seventh Day Adventist Church and attended by around 75 guests.

Music was provided by The Singing Stars of Mt. Gilead, and a number of friends and relatives shared memories of the guest of honor.

Betty Colson said Grace “has always been like a mother to me…I’m so thankful for her.”

Granddaughter Kenia Cates, who grew up out of state, told of times when she would visit Grace during the summer.

“She would take us fishing, and would never leave our side,” said Cates, who also told of a time when a number of wild pigs came charged them.

“Grandmother Grace used a double-barreled shotgun to run them off,” she said.

Since then, she has also been a member of East Macedonia Missionary Baptist Church and the Albemarle Seventh Day Adventist Church, where she is currently an active member.

In fact, for Grace’s entire life, her faith and serving her church has been at its center.

“She has been here (at church) every week until recently,” Deborah Cardwell, an Albemarle Seventh-Day Adventist member, said.

Pegues’ niece, Denise Kendall, described Grace as being very strict on her conduct during church services.

“My friends and I would start giggling at something during service, and she would tell us, ‘Just go outside until you can quit laughing.’ I would go outside, and suddenly things weren’t so funny anymore.”

In addition to her church activities, Grace was known as a dependable worker, and one who would and could do whatever job was needed. Over the years she worked picking cotton, picking peaches, performing housekeeping duties, working at a poultry farm and most recently working at the Stanly Community Christian Ministry’s Clothing Closet.

And a life of hard work has, according to Pegues, been instrumental in her longevity. When asked to what she credits her long life, Pegues replied, “staying busy.”

And her advice to those who are younger?