It’s been said that in order to truly combat the opioid epidemic that has afflicted so many people in the county, it will take the whole community.

A new youth initiative has been set up in partnership with the Center for Prevention Services in Charlotte to help reach students in the school system.

Kaitlin Smith, who grew up in Union County and graduated earlier this year with a degree in public health at East Carolina University, has been working to set up a Teens for Change club at West Stanly High School to educate students about the dangers of drugs and vaping.

The goal is to eventually expand the club to all of the public high schools in the county. She hopes to start the club at Albemarle High next month.

Smith was hired in September to serve as youth coordinator for the Center for Prevention Services. She is still learning what her job entails and admits the job will evolve based on feedback from the students.

“It is literally brand new,” she said.

Smith’s office is at the Stanly County Health Department, thanks to a five-year, $1.25 million Partnership for Success grant, given to the Center for Prevention Services in Charlotte, to help aid the county in its fight to curb the drug problem — something Smith is acutely aware of. One of her family members was a heroin addict. This inspired her to volunteer at a syringe exchange program during her senior year at ECU. 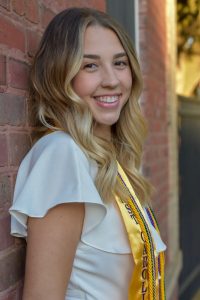 Union County native Kaitlin Smith graduated from ECU earlier this year with a degree in public health. She is the new youth coordinator for the Center for Prevention Services and is working with Stanly high school students.

Smith has had two meetings with students at West Stanly. The meeting on Wednesday morning featured 13 students, up from the seven that attended the previous week. She meets with the students once a week for about 30 minutes as part of the students’ designated club time.

“I’m very impressed with the kids and how excited and driven they are,” Smith said. “I think that’s really why I was hired because I’m 23 years old and they’re in high school and so I’m not far off in age and they’re more willing to speak to someone closer to their age than an adult.”

Smith has provided students with her cellphone number and has encouraged them to reach out to her if they want to talk. She said she has received numerous texts from students. She wants students to feel comfortable enough to open up to her about any problems — even unrelated to drugs — they might be facing.

While talking to the students, Smith realized they do not understand the dangers of doing drugs or vaping.

“They just know they’re bad and when they get caught with them they get in trouble,” she said.

One of her goals is to explain to the students the reasons behind why the drugs are dangerous, saying when students are properly educated, they “are more willing to make a change.”

Smith said students have been busy brainstorming ways to help educate their peers, including having speakers come to the school, creating informational guides and T-shirts and starting fundraisers.

The club has been looking at involving itself in the community. The students will walk and hand out pamphlets at the Albemarle Christmas Parade Saturday morning.

“If you want to make a big impact in your community, you need to go into the community to do so,” Smith said.

When not interacting with the West Stanly students, Smith is involved in trainings and meetings. She is part of Project Lazarus, a group comprised of public health, health care, law enforcement, mental health personnel and concerned citizens to combat drug abuse. The goal is to have students also serve on the group.

She was also one of the scheduled speakers at Tuesday evening’s Community Conversation at Albemarle High School. The program, which involved six speakers, was designed to be a way for students and parents to learn more about preventing substance, but only a few students and parents showed up.

The program was still valuable for Smith. She met with one of the students who got her number and texted her.

“She was just so excited and wants to get involved and I’m like that’s the whole point,” she said. “The fact that we made an impact on at least one girl was a big deal.”

She has told students that drugs are more potent than they used to be and though they can be addicting, the drugs are not worth getting suspended from school, contracting health problems or dying.

Though it’s still a work in progress, Smith said the club is a place where students “will educate themselves, educate their peers and hopefully by doing that, people will start to make a real difference in their lives.”

Looking into the future, Smith hopes the club will be an outlet for students seeking to help the community.

“I want people to know that there are students making a difference in their community,” she said.

She’s excited about the club’s potential for growth, especially as it enters the other high schools.

“If it grows at the rate that it’s growing now and they’re as open in the future as they are now, then it’s going to be a really cool thing,” Smith said.