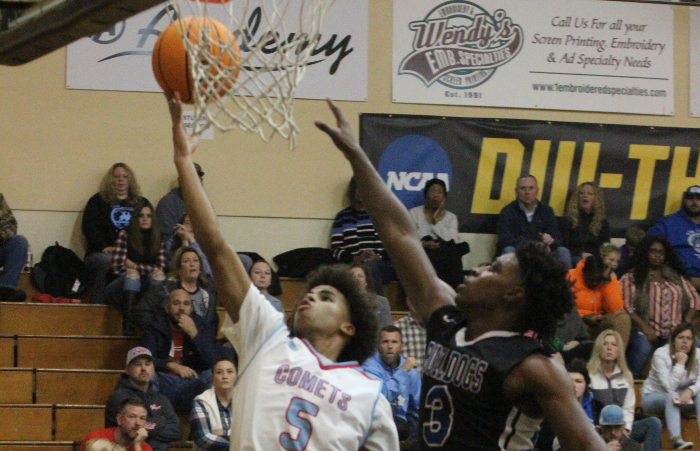 North Stanly's Koby Poole glides to the basket for a layup guarded by Albemarle's Malachi Baldwin in Friday's game at Pfeiffer University. (Photo by Charles Curcio/staff)

Friday’s men’s basketball game at Pfeiffer University between Albemarle and North Stanly needed overtime to settle things. The Bulldogs sent the game to overtime on a buzzer beater but the Comets won the game on the free-throw line, 72-70.

M.J. Raye led Albemarle (3-6, 1-2) and all scorers with 34 points including an offensive rebound and put back at the buzzer sending the game to overtime. Raye was 9-of-10 from the foul line and connected five times from the three-point arc.

Free throws made a huge difference in the game. The Comets were 21-of-40 at the line including 12-of-16 in overtime. North’s points in overtime all came at the stripe. For the game, Albemarle was 15-of-26
at the line.

The Comets led early but Albemarle fought back to tie the game after three quarters.

The Bulldogs trailed by six in the final seconds before Raye was fouled shooting a three-pointer. He knocked down three free throws to pull Albemarle within two, 60-58.

North was fouled and missed at the line, with Camarie McNeil pulling down the rebound. He passed to Malachi Baldwin in the corner, who missed a 3-pointer from the corner. Lucas Megson got an offensive rebound but his shot missed the rim. Raye caught the ball off the glass and scored with one second left. The clock ran out and the game went to overtime.

The two teams battled back and forth in overtime until the Comets led 68-63 with 1:02 left. Raye came down and drained a deep 3-pointer with 53.2 seconds left to pull Albemarle within two.

Raye had a chance to tie the game with 20 seconds left after rebounding his own missed shot but turned the ball over on a traveling call.

North led 71-68 but Raye had a chance to tie the game in the final seconds. Using a pump fake on his former teammate, T’Ziah Quarles, Raye drew a foul attempting a 3-pointer. However, Raye missed the first of three fouls shots making the final two.

After another Comet free throw with 1.7 seconds left, Raye’s half court heave missed to the right at the buzzer.

“We couldn’t just play like we’re not trying to win…we wanted to win big,” Poole said about taking the ball aggressively to the hoop in overtime.

Poole also said the team has been working on free throws since not shooting well the game before in a two-point loss to Piedmont.

Quarles talked about beating his former team saying he loves his North teammates.

“My teammates, I love them. They helped me through anything with the transfer. To get this win together as a team means so much more,” Quarles said.

Talking about his former team, Quarles said Albemarle is a well-coached team that have players on their team with a lot of heart.

North head coach Todd Helms said his team loves to get to the rim and draw free throws.

“That’s our forte is getting to the line and making those foul shots,” Helms said.

The Comets coach said the records do not matter when Albemarle and North Stanly play, comparing the atmosphere in Merner Gym to a Carolina-Duke basketball game.

“It was a great game, win or lose. It was fun to be part of, fun for the community,” Helms said.