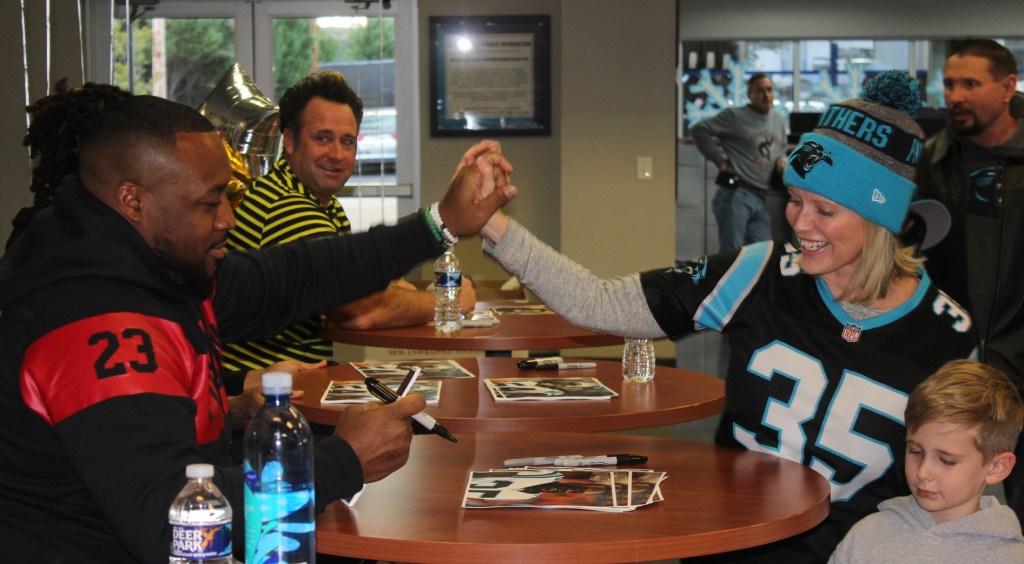 People lined up inside Joe Maus Chrysler Jeep Dodge in Albemarle Saturday afternoon to donate unopened toys as part of Maus’ annual toy drive. They also had an extra incentive to come — Shaq Thompson and Mike Tolbert of the Carolina Panthers and Jeff Reed, a former Pittsburgh Steelers placekicker and two-time Super Bowl champion, were available to meet fans and sign autographs.

Maus, who has several dealerships in Charlotte, said this is his fifth year hosting the toy drive, but first in Stanly County. He also hosts a similar toy drive in Charlotte. All of the toys collected will go to organizations in Stanly such as the Esther House and Atrium Health Stanly, Maus said.

Maus and his employees will personally donate the toys to the organizations this week.

Maus has collected about 2,000 toys which will all go to less fortunate kids in the county. He also donated many toys himself.

“It means everything to me,” Maus said about the toy drive. “I think it was unbelievably awesome to see the community come out to support the drive.”

He told the crowd of people lined up to donate that his favorite thing to do is to give back to the community, saying “as you get older you learn that.” 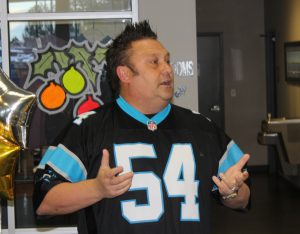 Joe Maus talks to people about the importance of giving back to the community.

Thompson and Tolbert enjoyed getting the chance to meet Panthers fans. Both stressed how important it is to give back to the community.

“It’s just important because…we both got little kids, but our kids are fortunate compared to other little kids,” Tolbert, a former Panthers fullback, said. “We just want to do our part to make sure they have a happy holiday.”

“I’ve always been a firm believer that you support who supports you,” Tolbert said, “and this is a community that has always supported myself and supported the Panthers.”

Tolbert said he had been to Stanly County once before when he got lost and ended up playing golf in Locust.

Thompson said giving back is important to him because when he was younger his mother would open up their house to the community to make sure all were welcome.

“We’re in a fortunate position where we are able to give back,” said Thompson, a linebacker for the team.

“I think it’s always good to give back,” said Sandy Smith of Albemarle, who came with his family to donate Hot Wheels toys and meet the players. 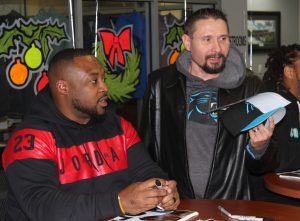 Hayley said it’s important to give back to the community during the holidays. 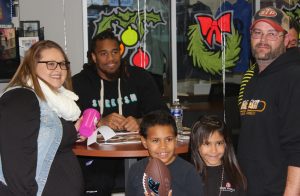 “It’s very cool,” Barber said about meeting Thompson and Tolbert. “I’ve been watching them for a long time since I was little. It’s pretty cool to see them in person.”