In 2016, Donna Reed saw her life change significantly, but it took nearly four years before she knew exactly why.

Along with husband Marty, Donna had relocated to Albemarle along with their twin sons in 1995, where Marty served as head coach of the Pfeiffer baseball team through 1999. 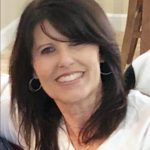 Donna Reed has made spreading awareness about pediatric cancer a priority.

After leaving Pfeiffer to pursue a professional coaching career, Marty was on the road constantly from early spring to early fall. And with the two boys attending Stanly County Schools, Donna became an active parent, volunteering in the schools and community.

Marty was eventually named bullpen coach for the Atlanta Braves in 2016. This provided the couple an opportunity to spend more time together than previously, when he had been traveling within the team’s minor league system. And during her stays in the Georgia capital, Donna began volunteering at a number of the city’s cancer treatment centers — particularly those who housed youngsters.

“I felt like this was something I needed to be doing,” she said. “But I didn’t know why.”

Just over two years later, during the Thanksgiving holiday of 2018, Donna’s college-student nephew Connor suffered a broken leg in a fall.

“The break was a spiral fracture, which was unusual in someone his age,” she said.

Upon returning home from college, Connor’s leg had still not completely healed. Even worse, he was suffering recurrent infections and pain, which eventually forced an emergency room visit during which doctors decided to do an MRI scan of the injured leg.

“When the MRI took three hours, we were afraid the news would be bad,” Donna said.

The doctors confirmed the family’s fears. Connor was suffering from Ewing’s Sarcoma, a rare type of bone cancer. When he had broken his leg seven months earlier, the break had accelerated the cancer’s growth. Now, Connor was harboring a football-sized tumor in the injured leg, and the cancer had spread to his hip and lungs.

“His treatment consisted of two phases of chemotherapy, surgery to remove the tumor in his thigh and femur, and to perform a partial hip replacement,” Reed said. “He also underwent surgery to remove a dead tumor in the lower lobe of his right lung. And final treatment consisted of 10 soft radiation treatments to make sure no other cancer cells were lingering in his lungs, hip or legs.”

Currently, Connor is cancer-free, and he and his family are cautiously optimistic.

“This type of cancer can re-occur,” Donna said.

After having witnessed Connor’s battle, the death of 20-year old Corey Morgan, who grew up in the Endy community and succumbed to Ewing’s Sarcoma Nov. 26, affected Reed deeply.

“I never met Corey in person,” she said, “but I did talk to him on Facebook messenger a number of times. I attended his memorial service on Dec. 1, and the intense love for this young man was evident in all those who were there. As I listened to those who spoke about him, I simply asked in silence: Why? Why this young man, so full of life and with so much ahead of him?”

Her experiences with those affected by pediatric cancer have made Reed a full-fledged advocate with a mission of making all with whom she comes in contact aware of the plight of both the patients and their families. As such, she is quick to share a number of alarming statistics she has learned relating to cancer treatment in children and adolescents.

“Cancer most commonly affects adults, so as a result, medications specific to young people are not a high priority for the pharmaceutical companies,” she said. “There are 46 youngsters a day diagnosed with cancer, and the number is growing, yet only 4 percent of the dollars allocated for cancer research go specifically toward pediatric cancer treatment.”

And while various foundations generate supplemental funding to battle the disease, treatment regimens for young cancer patients remain antiquated compared to those available to adults, she said.

“Cancer treatments for children have remained the same for the last 30 years,” said Reed, citing the same lower priority placed on children’s cancer funding as opposed to that of grown-ups.

“Pediatric cancer patients get the treatments that once were used for adults, but which (for adults) now have been replaced with more modern methods. And, in some cases, a 3-month-old and a 15-year-old may receive the same basic treatment.”

Reed is already working to bring together families and young people in and around Stanly County who are affected by cancer. In addition to initiating the appointment of 12 pediatric cancer survivors as grand marshals of the Albemarle Christmas Parade, she is working on a Facebook group for pediatric cancer patients and families. And fundraising for research efforts is also being planned, in the form of a run-walk event.

“Since September is Pediatric Cancer Awareness Month, we are in the early stages of planning the first annual Go Gold 5K in September 2020,” she said. “We want people to come out and support our efforts to raise funds and awareness.”

So, almost four years after having felt that need to volunteer in the pediatric cancer centers in Atlanta, Donna now knows the “why” behind the need she felt.

“Through the trials we face, God has a purpose, even when we don’t understand,” she said, referring to Morgan’s memorial service. “I left the service with a sense of peace in knowing he is with our God in heaven, and determined to build awareness and to fight for all children and their families affected by pediatric cancers.”

Reed encourages the parents of those affected by pediatric cancers to contact her by email at mattmarty419@gmail.com.