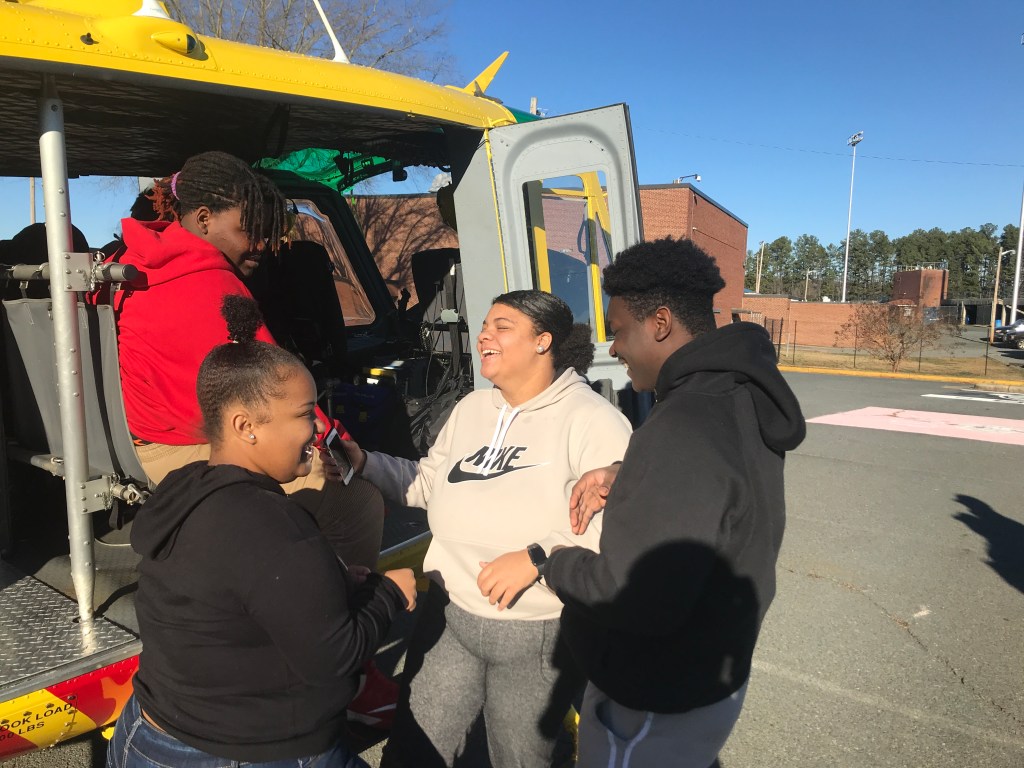 Albemarle students Kayla Richardson, Ayanna Ridenhour and David Ford interact with each other as they examine the forest service helicopter.

Albemarle High School students in Kenny Kendall’s public safety class braved the cold Wednesday morning as they gathered outside to learn about the North Carolina Forest Service — and watch as a forestry service helicopter landed in the parking lot.

Each year, Kendall chooses a guest speaker from a specific field to talk to his class. This year, Jeremy Callicutt, county ranger with the N.C. Forest Service, spoke to the class about the duties of a forest ranger. He also helped orchestrate a forestry service helicopter — specifically a Vietnam-era refurbished Huey, stationed out of Hickory —  to come to the school. 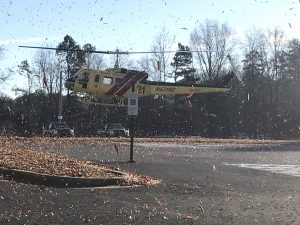 The forest service helicopter landed in the parking lot of Albemarle High School.

The students enjoyed getting close to the chopper and even getting to sit inside with their friends. The forestry service members that piloted the helicopter also talked to the students about their duties and responsibilities. 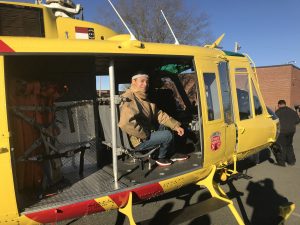 Freshman Christian Reyes checks out the inside of the helicopter.

The forestry service helicopters are mainly used to put out wildfires (thanks to a Bambi bucket attached to the chopper that carries and later releases water), although they can also be utilized to help perform a controlled burn. The N.C. Forest Service has five helicopters in the state, Callicutt said.

“Here in Stanly we’ve not had to use the helicopter a lot,” Callicutt told the students.

He said it’s most often used in the county for controlled burns, especially at Morrow Mountain State Park.

A controlled burn is a preventative measure, Callicutt said.

“It’s almost like putting insurance on your property because once we burn that up under our conditions, it can’t burn because we’ve eliminated the fuel.”

Callicut said the big reason for having the helicopter come to the school is he hoped students learned more information about the forest service as a possible career path they could enter upon graduation.