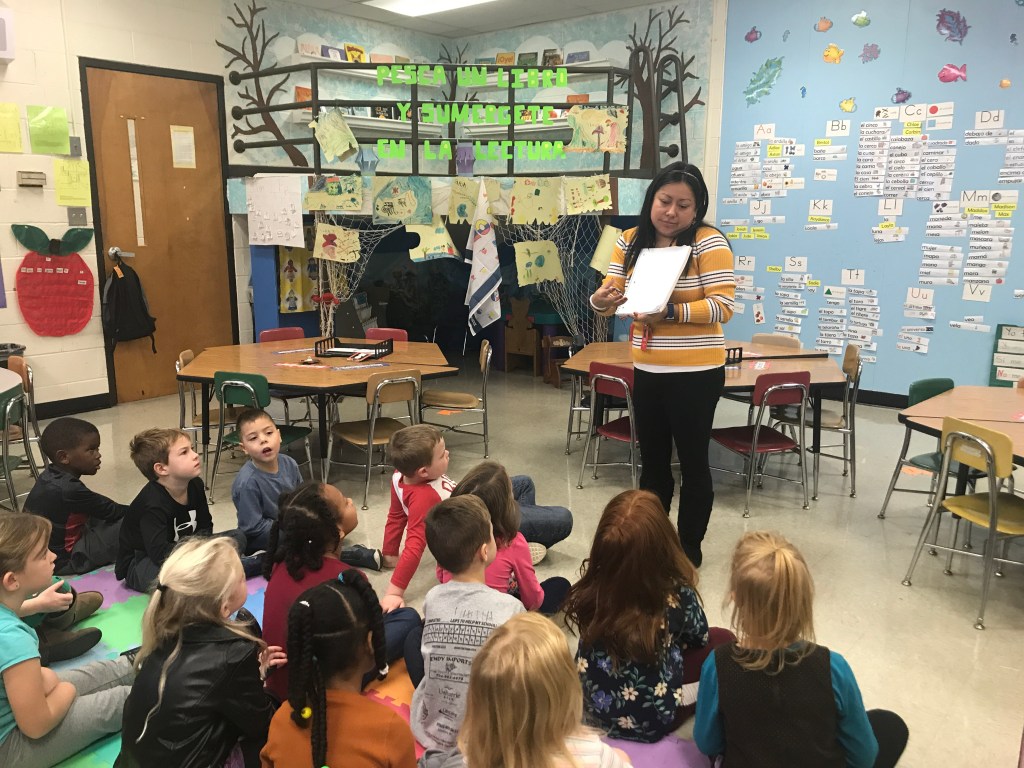 Karol Garcia reads in Spanish to her kindergarten students at Endy Elementary.

On Tuesday morning, the students in Milena Vasquez and Karol Garcia’s kindergarten class at Endy Elementary School learned about the different parts of a historia (story) — the personajes (characters) and the lugares (places).

During the lesson, Garcia and the class discussed and wrote down the different personajes and lugares in Rodolfo el Reno de la nariz roja (“Rudolph the Red-nosed Reindeer”). 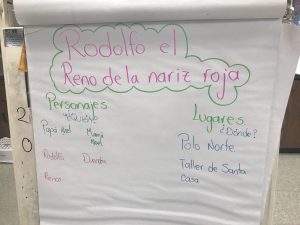 The students are the inaugural class participating in a dual immersion language program. The program’s goals are for students to be bilingual, biliterate and bicultural.

The program provides instruction in Spanish and English over an extended period of time from kindergarten through at least the fifth grade. Vasquez said the students speak 90 percent Spanish throughout the day, with the only English coming from teachers in their art, music or physical education classes.

The basic curriculum and core standards are the exact same as what is being taught in the other kindergarten classes. It’s simply being taught in Spanish as opposed to English.

“This is a full immersion program, kids get the culture and full experience of other countries that speak Spanish and get to partner with other Spanish speaking students across the world,” Stanly County Schools Superintendent Dr. Jeff James said.

James added that research shows that by third grade, the students in the program will “outperform their peers and retain a true bilingual vocabulary far beyond those just taking language in high school or college.”

He said they will build the program to K-5 at Endy and if if there is enough response, the school system will look at expanding to other schools.

There was no easy, gradual introduction into the new language for the students. From the first day of class, Garcia, who is from Colombia, and Vasquez, from Costa Rica, have spoken strictly in Spanish.

“At the beginning of the year, they were like, ‘I have no idea what you guys are saying,’ ” Garcia said.

Vasquez said she and Garcia initially used a lot of body language, visuals and pictures to interact with the students, which was difficult, but as the students started learning the basics — “Me llamo…” or “My name is…” — real communication between the teachers and students started to form.

Four months into the school year, the students have started to read and identify Spanish vowels, colors and other basic vocabulary. Many can count to 100. Instead of reading the kids’ book “The Very Hungry Caterpillar,” the students read “La Oruga Muy Hambrienta.” Though the students can ask questions in English, Vasquez and Garcia will only respond in Spanish. They are also tested each month using an online Spanish assessment.

“They will acquire the language, they won’t learn it,” Vasquez said. “They will be bilingual and they will learn more because their brains are like sponges.

And it’s not just the students that are learning Spanish. Garcia said parents have told her they are starting to use Spanish at home, thanks to the interactions with their kids.

The students have also learned about Spanish culture. They have already studied the cultures of both Costa Rica and Colombia. Garcia mentioned that after studying a poem about the Colombian flag, one of the students stood up and recited the poem at home during dinner. The student’s mom filmed him and sent the video to Garcia.

“It was awesome,” Garcia said, upon receiving the video. “That fills our hearts.”

Both teachers are experienced educators. Vasquez has four years of experience teaching English to kindergarten students in Costa Rica, while Garcia has taught nine years, including three at a similar program in Virginia.

“Both teachers are full of enthusiasm that is readily seen in the classroom,” James said.

Both came to Stanly in July and went through a one week dual immersion orientation with other teachers around the state in Durham to get familiar with the state school standards.

The teachers have set up video conferences where Vasquez’s former students from Costa Rica interacted with her students at Endy.

Next year, Vasquez will move with her students to first grade to continue Spanish instruction and Garcia will remain in kindergarten and teach another class with the help of a new teacher. The students will learn how to read in English in the second grade, Vasquez said, when it will be about 50 percent Spanish and 50 percent English.

While the students are learning Spanish, Vasquez said she and Garcia have also been improving their English. She said one student recently told her how to properly pronounce the word “crocodile.”

During the Tuesday morning literacy lesson, Vasquez helped 6-year-old Paisley Wallace read a book titled “A jugar con mis amigos” (“To play with my friends”). She helped Wallace sound out difficult words such as “di-bu-jos” (drawings). 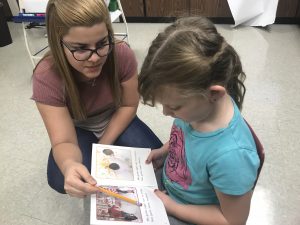 Milena Vasquez helps 6-year-old Paisley Wallace as she reads a book in Spanish.

Wallace said her favorite part about the program is learning with her friends. She also enjoys that her teachers talk in Spanish.

How have Wallace and her classmates learned to understand and communicate in Spanish in only a few months?

“We had to pay attention,” she said.