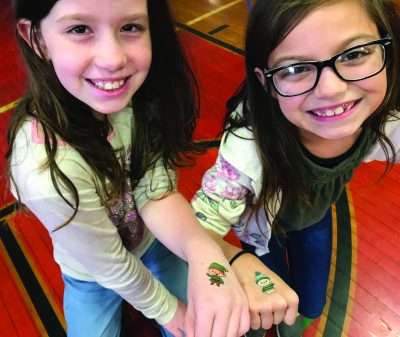 “Hidden in plain sight” might describe the Air National Guard presence in Stanly County. It’s New London facility is off the beaten path, but the monstrous Air Force C-17 cargo aircraft cannot hide, even in the dark, especially as it rumbles over the village of Badin, not far above the towering oaks.

Even so, members of the 145th Airlift Wing arrived quietly in Badin on a recent Saturday with a readiness to bring smiles to more than 100 Badin Elementary School children.

“Operation Santa Claus” moved from the planning phase to the execution phase in the school gymnasium, the cafeteria and Keely Towne’s kindergarten classroom. 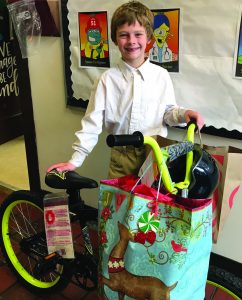 Children were welcomed back to school by Principal Damon Rhodes, and several of their teachers on a day usually spent at home.

The youngsters were accompanied by parents, grandparents or guardians to a Christmas party complete with craft activities, inflatables, balloons, lunch, Santa Claus and gifts galore.

“Today is for the children,” said Technical Sgt. Eric Maiers, one of the party-planners.

For several months, board members, like Maiers, of Chapter 7 of the NCO Academy Graduates Association, have been planning a way to reach out to the Stanly County community.

Part of the non-profit association’s mission is community involvement, and the Christmas holidays highlight the reality that some children go without Christmas, Maiers said.

Badin Elementary was identified for its significant number of students who receive free and reduced lunches. Rhodes said the number of children is around 200 to 250, or just over 50 percent of the school population.

The Parent Teacher Organization and various churches have helped with Angel Trees in the past. Weekend food bags are also sent home weekly with 15 to 20 children, Rhodes said.

Master Sgt. Jacqueline Plumley of the 235th Air Traffic Control Squadron is a Badin Elementary parent who has been an advocate for the Badin children as well as a local ANG contact for the teachers and staff who selected Angel Tree children. Siblings at other schools were also included among the recipients.

According to Plumley, this is the first time the ANG units have sponsored a school and the plan was that gifts would fill needs more than wants.

About 80 percent of the 1,300 airmen from the 145th Airlift Wing are based in Charlotte, so most of past outreach efforts have centered on that area. This year, the airmen wanted to provide for the New London facility’s Badin neighbors.

About 260 guardsmen are attached to either the 235th Air Traffic control Squadron, the 263rd Combat communications Squadron or the 145th Airlift Wing at the ANG facility off Airport Road. Some of the service members have lived in the area for 30 years, like Badin resident Master Sgt. Derric Allen, though temporary assignments take them all around the globe.

Thirty or so ANG members from Charlotte and New London showed up at school by 9 a.m. on this Saturday to prepare for their special guests. They hauled their own grill for the hot dogs and prepared to serve lunch to 450 children and adults.

Since some families were unable to come, the organizers donated 77 pounds of food to Stanly Community Christian Ministry when the party was over.

Oakboro native Lt. Col. Jeff Kidd serves as chaplain to the Airlift Wing and spends one day a week with members of the New London units. Kidd said the ANG members he serves with are a highly dedicated bunch, not only in Mecklenburg and Stanly County, but wherever they are deployed all over the world.

Fourth grade student Layla Story, who came with her Pawpaw, Chris Storey, said “Santa is very giving and has a tender heart.”