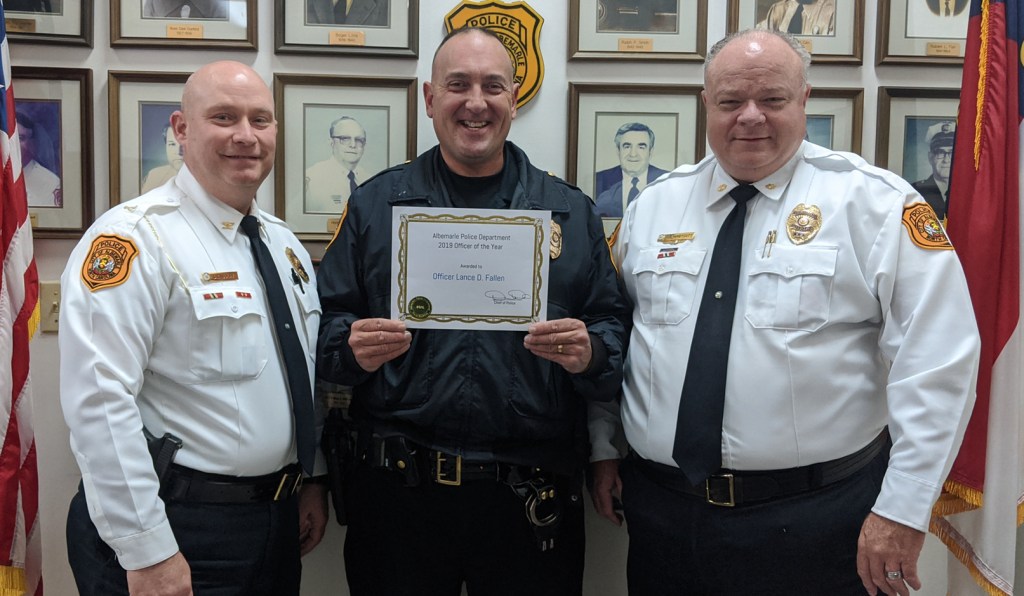 In 2017, one of Lance Fallen’s best friends died by suicide.

To better try and understand what his friend was going through, Fallen took action. He read as much as he could about suicide, participated in an Out of Darkness Walk at UNC Charlotte and he completed a training called Talk to Save Lives to be able to teach others in Stanly about suicide prevention. He said he has taught around 10 prevention classes over the last two years.

Fallen, who has been an officer with the Albemarle Police Department for the last 15 years, provided a suicide prevention in-service program to the city officer’s over four days in October.

Thanks to his efforts promoting suicide awareness and prevention, Fallen was recognized as the 2019 Officer of the Year for the Albemarle Police Department.

The police department’s Facebook page broke the news Dec. 19, writing that “It takes a unique person to be able to talk about suicide and reach those in need. Officer Lance Fallen is an asset to the agency as well as to the community.”

He discovered he was chosen as officer of the year Dec. 18 and the actual presentation occurred the next day. This is his first time receiving the award.

Fallen said the award was extra special knowing he received it in large part thanks to his efforts promoting suicide prevention.

Because suicide is considered such a taboo subject, it’s all the more important for people to be educated on it, he said.

“Suicide in the United States is a silent killer because it’s a topic that no one wants to talk about and I think it’s something that everyone should talk about because it affects everybody,” Fallen said, adding that it especially affects first responders, due to the nature of their work.

He said since teaching the suicide prevention classes, he has had people feel comfortable enough to share their personal stories with him.

Fallen also became involved with the North Carolina chapter of the American Foundation for Suicide Prevention shortly after his friend passed. He is on the state board and is one of the co-chairs for the group’s volunteer engagement committee.

He keeps a bag full of suicide prevention materials in his car in case he comes across people who he can talk to about the subject.

Though Fallen hasn’t presented the in-service training to other law enforcement agencies in the county, he has had several people within departments express interest.