Taking a walk in Bethlehem 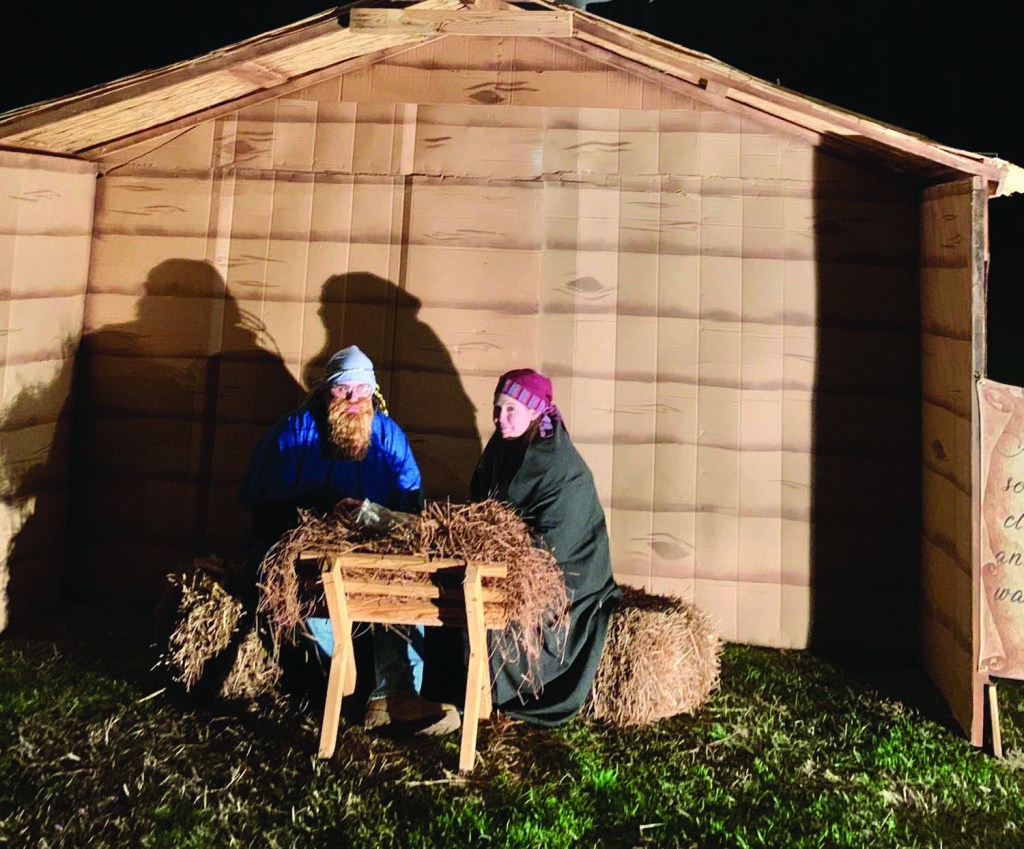 “We have done the event on a walk-through format the last two years,” director Tonia Diggs said, noting it was conducted as a drive-through in 2017, its initial year.

“This takes a huge team to accomplish,” Diggs said, noting outstanding participation throughout the church. “Every age group in the church is involved in this event,” she said, adding that the production required four months of preparation.

“We try to give those who come out as close a representation of Bethlehem as we can,” she said, noting sounds such as Roman Centurions complaining of their plight as they collected taxes, and the banging of blacksmith’s hammers; smells such as those of wood burning and bread baking; and sights of live barnyard animals and clothing accurate to first-century

Judea, are designed to make the experience memorable. Visitors to the event entered through the church fellowship hall and were taken in small groups on a tour of Bethlehem, including shops, vendors and craftsmen, a trip to the hills where shepherds first heard the annunciation, the inn, the manger and finally a glimpse of what was to come for Jesus…the cross.

Lead participants in the event were: 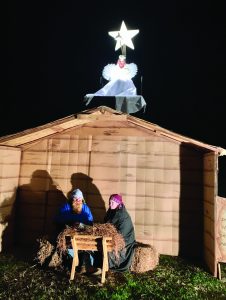 In the midst of the Roman-ordered census and taxation, reports of a series of unusual events have unfolded recently in the small Judean town of Bethlehem.

During the early morning hours of Dec. 25, reports of a brightly-illuminated apparition announcing a message of reassurance quickly spread, having originated from a number of shepherds who had been tending their flocks in the hill country surrounding the small town.

“I’ve never seen anything like this,” said one of the shepherds. “He (the apparition) told us that (the Messiah) was being born down here in town. Naturally, we wanted to check it out, so we hustled back down the hill right away.”

“It was really scary at first,” he continued. “You know, we run into wild animals trying to attack our sheep all the time, but other than lightning, we’ve never had to deal with anything coming out of the sky before. Yet, the message he brought us, telling us ‘fear not’ and that he was bringing ‘glad tidings’ kind of helped settle our nerves down.”

Several other shepherds who had stayed behind to tend the remaining sheep reported an equally bizarre sighting, which apparently took place just moments after the initial encounter.

“A few of our guys left to go down to town and find out what was happening,” a spokesman for the group said. “They had just left and suddenly there were more of those messengers in the sky than you can count… the heavens were full of them, and they were singing something to the effect of, ‘glory to God in the highest’ and ‘peace and good will toward men.’ It was overwhelming.”

When word of the sightings and message reached town, some questioned the reliability of shepherds as witnesses (“that good-for-nothing bunch has been hitting the wine again,” scoffed one resident), while others pointed to historical accounts, most notably the writings of Isaiah, as having actually predicted the coming of a Savior.

“The coming of the Messiah, a descendent of King David who is to liberate the Jewish nation, is foretold in the scriptures,” stated a spokesperson for the local chapter of scribes, who noted a passage from the book of Numbers in addition to the prophecies of Isaiah.

“In Numbers 24, we read, ‘What I saw in my vision has not yet happened, but someday, a king of Israel will appear like a star,’ ” said the scribe, who added, “things around here have been tough lately, but we believe a deliverer is coming.”

Zacharias, an area priest, agreed with the scribe based on personal experience.

“This sounds like the same messenger, an angel by the name of Gabriel, that appeared to me a couple years ago and predicted that my wife Elizabeth and I would have a child,” he said.

“He told us to name the baby John, and said he was destined to prepare the way for the coming of the Messiah.

“And we don’t need to be questioning this messenger,” he warned, “because when I told him I thought we were too old to have kids, he got mad and took away my voice until eight days after the baby was born.”

“No doubt about it…the Lord is up to something,” Zacharias concluded.

After having delivered the news heralded by the host of messengers, the shepherds were joined by others in a search for any mothers-to-be in town who were nearing their due date.

Following inquiries to a number of fully-occupied lodging facilities, one innkeeper confirmed having offered makeshift lodging to an expectant couple who were in Bethlehem as a result of the census.

“The young lady was starting to go into labor,” recalled the innkeeper, “but we were completely booked up, so I made arrangements for them to camp out in our stable for the night.”

“We have two children, so I can identify with what she is going through,” the innkeeper’s wife said. “I felt really guilty that we had no rooms.”

The innkeeper then led the searchers to a stable behind his inn, where they met Joseph, a native of Bethlehem, who is currently employed as a carpenter in Nazareth, and his fiance, Mary, who had, only a short time earlier, given birth to a son.

Like those of the shepherds and prophets, the new mother’s account of events leading up to and surrounding the birth also indicated providential involvement.

“That same messenger (Gabriel) who appeared to Zacharias and eventually to Elizabeth, also appeared to me nine months ago,” she said. “He told me this child’s actual father is God, and that I am to name him ‘Jesus.’ ”

Joseph, who had considered ending his engagement to Mary upon the news of her pregnancy, noted he also was paid an angelic visit, albeit in a dream.

“It was so vivid,” he said, “and after that happened, dumping her was out of the question. I was raised a believer, and I learned early on that you just don’t defy the angel of the Lord.”

The unexpected arrival of a delegation of magi added credibility to what most in the area believe are signs that the newborn is indeed the prophesied Messiah.

“We saw a new star in the sky some time ago,” said Balthazar, one of the three kings. “That’s not something you run into every day, so we did some research and found out that Jewish scripture predicts, ‘a king of Israel will appear like a star.’ Given that description, we figured that we better investigate, so we headed in this new star’s general direction.”

Balthazar noted that as the delegation was passing through Jerusalem, the king there (Herod) had shown an uncanny interest as to details of this child king’s birth.

“His curiosity seemed weird, given some of the questions he asked,” said Balthazar, “and then he wanted us to send a messenger to let him know when and where we found the child. But just last night, all three of us had a dream that warned us not to tell Herod anything. So once we worship and present our gifts tonight to the newborn king, we are going to stick to the back roads on the way home. I don’t want anything else to do with this Herod dude — he’s kind of creepy.”

Zacharias, the priest who had earlier described his encounter with the angel of the Lord, noted that the prophet Isaiah, who forecast the birth of the Messiah, has also provided a glimpse of His future.

“Isaiah described the Messiah as ‘a man of sorrows,’ and tells us ‘He was wounded for our transgressions. He was bruised for our iniquities. The chastisement of our peace was upon Him, and by His stripes we are healed.’ ”

“This doesn’t sound like what we are expecting in a Messiah,” said Zacharias, “but, on the other hand, who would have thought that He would be born in a barn?

“Like I said earlier, He (the Lord) is up to something. I don’t know exactly how it’s going to transpire, but I do know He’s going to rescue His people…that’s a promise.”