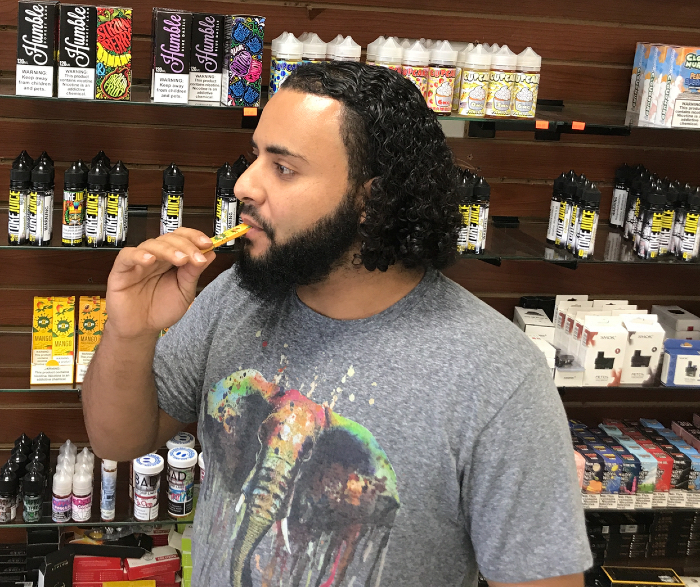 Ak Alshmeeri works at Hybrid Vapor & Tobacco Shop in Albemarle and said he has already lost business thanks to new federal legislation changing the age to purchase tobacco products from 18 to 21.

Thanks to legislation signed by President Donald Trump Dec. 20, the U.S. Food and Drug Administration has officially changed the minimum age to purchase any tobacco products from 18 to 21.

According to the USA website, “It is now illegal for a retailer to sell any tobacco product – including cigarettes, cigars and e-cigarettes – to anyone under 21.”

In an email to The Stanly News and Press, Stanly County public health education specialist Wendy Growcock said the new law will help prevent younger kids from getting their hands on tobacco.

“Because studies show that the majority of adult tobacco users started using tobacco before the age of 18, the new T21 law can be helpful in preventing some use of cigarettes and e-cigarettes in teens,” she said.

“Nicotine is known to affect brain development in youth, which continues until around age 25,” she added. “Raising the legal age to buy tobacco from 18 to 21 would help in delaying the first use of tobacco and allow for more time for the brain to fully develop.”

As of December, 19 states and over 530 cities and towns (though none in North Carolina) have raised the tobacco age to 21, according to the nonprofit Campaign for Tobacco-Free Kids.

In September, the Trump administration announced a plan to remove flavored e-cigareetes and nicotine pods from the market though no significant action as of yet has been taken. The plan came amid growing concerns about teenage vaping and a mysterious outbreak of vaping-related lung injuries which had claimed the lives of several people.

E-cigarettes, or e-cigs, are battery-operated devices used to inhale an aerosol that often contains nicotine along with flavorings and other chemicals. E-cigs are popular with teenagers and are now the most commonly used form of tobacco for teens in the country.

According to the Centers for Disease Control and Prevention’s annual National Youth Tobacco Survey, e-cigarette use for high school students increased 12 percent to 21 percent from 2017 to 2018.

Among high school students, 27.5 percent reported using an e-cigarette in the previous 30 days

But not everyone is happy with the new legislation.

“It’s ridiculous,” said Ak Alshmeeri, manager of Hybrid Vapor & Tobacco Shop in Albemarle, about the legislation, “because it cut my business.”

Alshmeeri said 60 percent of his business comes from young people ages 18 to 25. He added that he lost roughly $300 in four hours on Dec. 29 because he had to turn away so many previous customers who are no longer of legal age to purchase his products.

“It’s not going to stop people from smoking or vaping anyway,” he said.

Trevor Smith, 19, of Oakboro had worked on-and-0ff at Hybrid Vapor & Tobacco Shop for the last several months but is currently searching for another job since employees now have to be 21 to sell the products.

Smith, who smokes disposable e-cigs, and has been vaping since he was in middle school, said he now has to “drop everything and look for another job now.”

He will also have to stop smoking e-cigs which he said will cause him to experience headaches as part of the withdrawal process.

McLane Shayby, who works at another Hybrid Vapor & Tobacco store in Richfield, doesn’t agree with the new legislation, saying that the law should stay the same. Like Alshmeeri, Shayby has also had to torn away customers who are no longer of legal age.

Alshmeeri and Shayby said they were both caught off guard with the new legislation.