A Norwood man was arrested early Christmas morning after shouting obscenities and getting into a physical altercation with a Stanly County Sheriff’s deputy and a Norwood police officer.

The incident took place at 621 Claude Lee St. at the residence of Trent Thomas Love. A deputy was assisting the Norwood officer, who was responding to a 9-1-1 hangup call, according to Sheriff Jeff Crisco. 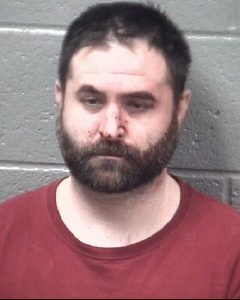 After the law enforcement officers knocked on his door, Love, 32, began shouting obscenities, telling them to go away, Crisco said.

Once Love was outside, along with his mother, Cathy Bivens, 64, he made threats and was belligerent, Crisco said. At some point, Love pushed the officer and taunted the deputy, Crisco said.

When the deputy went to detain Love, he became more belligerent and took a swing at him, Crisco said. Love grabbed hold of the deputy’s gun while it was in the holster. The officers ultimately placed Love under arrest.

Crisco said alcohol was involved in the incident.

Love was charged with assault on a government official and also second-degree kidnapping, since Love did not allow Bivens to leave the residence to come outside to talk to the officers, Crisco said.