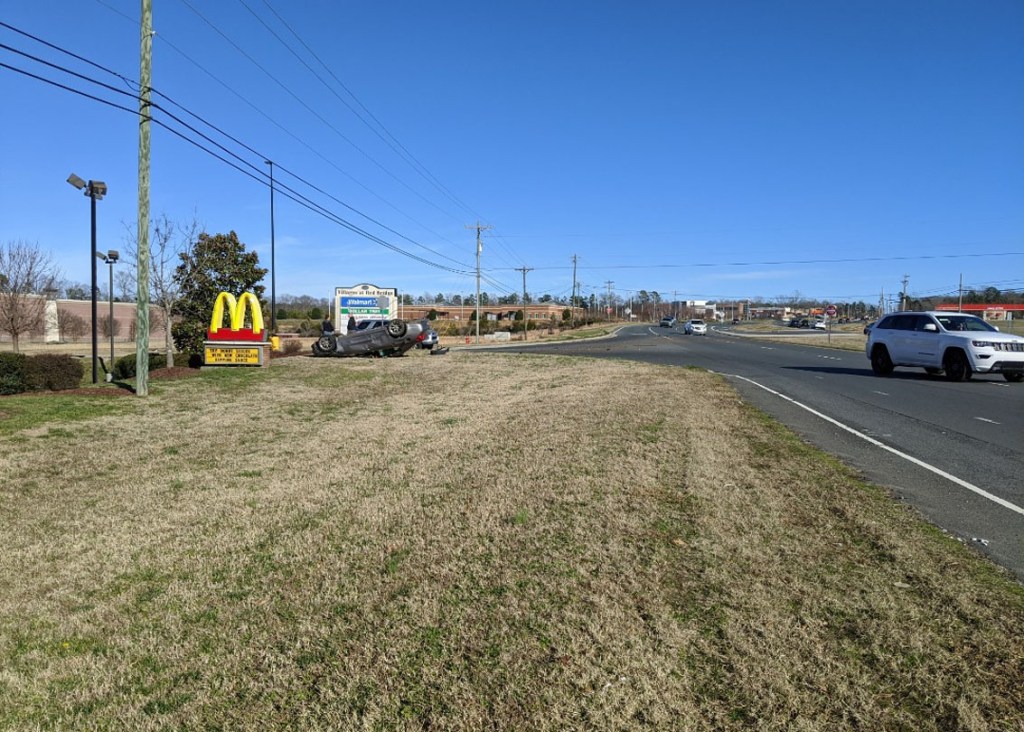 A driver flipped his car Wednesday afternoon while trying to avoid what he thought was a traffic stop for him. (Photo by Isaiah Lilly)

A man who Highway Patrol says mistakenly thought he was being pulled over, hit a car, flipped his car and led law enforcement on a four-hour search by land and air Wednesday afternoon.

Highway Patrol Sgt. E.T. Phillips said a trooper was attempting to stop a different vehicle near the Stanly-Cabarrus County border in Locust around 2:15 p.m.

“For some reason this individual thought he was getting stopped and made an erratic u-turn,” Phillips said.

The trooper then turned around to pursue the individual, Anthony Wayne Johnson, 31, of Charlotte. Phillips said Johnson slightly hit another car before crossing the highway and flipping his car several times. It came to rest upside-down in the grass of McDonald’s. Johnson left the scene on foot and entered the Red Bridge golf community, Phillips said.

Stanly and Cabarrus troopers and sheriff’s deputies, Stanfield and Locust police officers and the Highway Patrol helicopter team assisted with the search. Hours later, Johnson was found hiding behind a house and taken into custody without incident, Phillips said.

Johnson was taken to Atrium Northeast for treatment for an arm laceration because of the wreck. He has now been admitted into the Stanly County Jail.

He faces charges of reckless driving, driving while license revoked, hit and run and resist, obstruct and delay for fleeing.

“When he took off running, he had them in his hand and he dumped them,” Phillips said. “We were able to retrieve them immediately.”