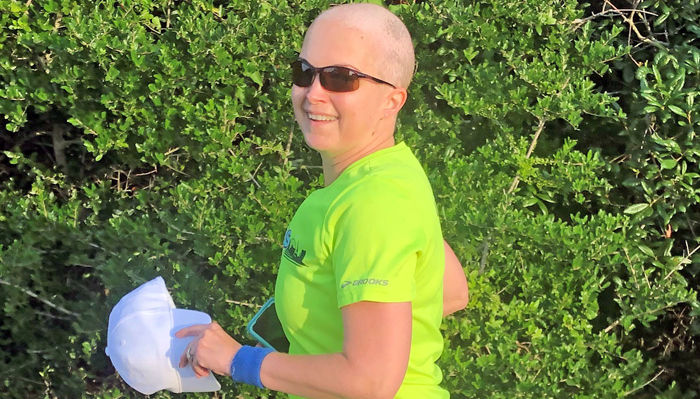 Lisa Fowler continues to keep her streak alive of running a mile a day despite her fight against breast cancer. (Contributed)

No matter where she would be, on the road for business or at home, Lisa Fowler always found time to run at least one mile.

The test to keep her streak alive received a strong challenge when she was diagnosed with breast cancer in 2019, but Fowler has continued to keep running and running.

Fowler and her husband, Erick, had been running for about six or seven years, she said, often turning a staycation into a chance to run a half-marathon.

A Mount Pleasant resident who participates in the Vac & Dash Super Streaker Club Challenge, Fowler ran her first marathon in 2015 but was looking for a new challenge the next year.

Despite minor injuries or travel for her job with Peapod Digital Lab, a subsidiary of the company which owns Food Lion, Fowler kept running, even in the middle of the night.

Another fellow Super Streaker, Tim McBride, was how Fowler learned about the club. She said McBride often ran and donated money for cancer research.

“His motto is you run for those that can’t. You know cancer patients can’t take a day off so neither will I,” Fowler said of McBride’s efforts.

But Fowler’s life changed April 16 when she became one of those patients after finding a lump on her breast, which was eventually diagnosed May 6 as cancer.

Despite undergoing a mastectomy Oct. 27 and the first reconstruction surgery last week, Fowler continues her streak by running a mile a day.

“Cancer can take lots of things away from me. It can take my hair, my peace…but there was one thing I could control,” Fowler said about running.

Runners participating in the Super Streak Challenge have to have a degree of stubborness, Fowler explained, adding continuing to run has helped keep her healthy. For example, after having had reconstruction surgery, she was up and doing what she described as a really slow kind of jog.

“Today, I can stand up straight. I think it takes most people about two weeks just for them to stand up,” Fowler said.

“The activity your body needs helps you to heal a little faster. It helps me to focus on the some of the things other than those I can’t control.”

Her doctors said she should be OK as long as she takes it easy running, including her surgeon Dr. Peter Turk, who himself has run in the Boston and Charlotte marathons.

Fowler’s friends formed a chemo chaperone list so she never had to go alone.

She added her motto throughout the whole streak and cancer process has been to choose joy.

Fowler gave hand-written thank-you notes and homemade treats to every nurse, doctor or any other staff member who was part of the process.

“Overall, we made a conscious effort to control the situation with joy, positivity and encouragement. Our attitude was a choice,” Fowler said.

Running gave Fowler a sense of stress relief as well as a moment during the day just to be normal and keep a normal schedule for her family.

Cancer was no stranger to the Fowler family, though. Lisa’s mother-in-law, Sue Fowler, passed away from liver cancer right before Christmas.

Lisa had to tell her 8-year-old son, Blaine, about different types of cancer and how outcomes may be different.

“It made me even more determined to be normal and keep my routine as much as possible,” Fowler said.

Fowler said she wanted to be the girl that ran every day and not the girl who has cancer.

She credits her husband, son, friends and members of the running community for being supportive as she continues to recover while also running a mile a day.

“You’re not alone. You may be the one with cancer but you have a support system around you,” Fowler said, adding one positive has been family and friends showing her how much they care.

“We always try to keep a positive spin on it…God chose me for this journey for some reason, chose our family for the journey. There are things you have to go through and we’ll be stronger at the end of it.”