When Clemson and LSU square off on Monday night in New Orleans, it won’t be the first time the two teams have done so with a national championship at stake, and longtime West Stanly High teacher and coach Larry Wagner was on the Tulane Stadium turf 61 years ago, when the two Tiger squads met in the 1959 Sugar Bowl. 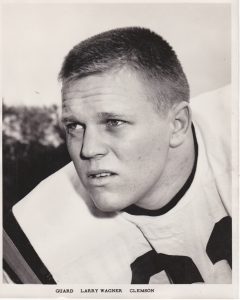 Former West Stanly teacher and Coach Larry Wagner played for the Clemson Tigers in the 1959 Sugar Bowl versus LSU. (Contributed)

When Clemson and LSU square off on Monday night in New Orleans, it won’t be the first time the two teams have done so with a national championship at stake, and longtime West Stanly High teacher and coach Larry Wagner was on the Tulane Stadium turf 61 years ago, when the two Tiger squads met in the 1959 Sugar Bowl.

As a sophomore guard for the Clemson squad, Wagner was a key participant for the ACC champions, who had finished conference play with an overall record of 8-2, and a 5-1 conference mark.

“We had pretty good teams during the time I played,” Wagner said. “We won the conference three of the four years I was there, but we slipped up and let N.C. State beat us in 1957.”

Wagner, a Rowan County native, had been an all-state performer for the Spencer High School “Railroaders”, where his outstanding play caught the attention of Clemson’s Hall-of-Fame coach Frank Howard and ultimately earned him a full football scholarship.

Looking ahead to Monday’s matchup, Wagner noted several similarities to the 1959 game.

“Coach Howard really played up the underdog role to us,” said Wagner, “and I’m sure Coach (Dabo) Swinney is doing the same thing.”

“Also, this year’s LSU team has both the Heisman Trophy winner (quarterback Joe Burrow) and Coach of the Year (Ed Orgeron), just as they did in 1959 (with Heisman winner Billy Cannon and Coach Paul Dietzel)” he noted.

“This year the national championship goes to the winner, but it wasn’t that way in our (1959) game,” added Wagner.

Indeed, in the pre-playoff days, the national champion was named by the Associated Press, and conference affiliations with bowl games often resulted in pairings that did not reflect a clear championship.

Leading up to the game, Howard chose to house the Clemson team at Biloxi Air Force Base in Mississippi rather than in New Orleans.

“He didn’t want us around all the New Year’s Eve craziness in New Orleans,” said Wagner, “so we traveled there by bus the morning of the game.”

LSU entered the game having earned its top ranking by outscoring its opponents 275-53, with an average winning margin of 22 points, and only two games decided by one touchdown or less. Clemson’s record was blemished only by losses to ACC foe South Carolina and neighboring rival Georgia Tech.

Football in the 1950’s was markedly different than today’s wide-open game. Both the score and game statistics reflected this as only 15 passes were thrown the entire contest, 11 by LSU and 4 by Clemson.

But it was a pass, ironically thrown by Cannon, LSU’s leading rusher, that decided the outcome.

“He (Cannon) had been really effective on wide sweeps all season long,” Wagner said, “and we were prepared for that. But in the third quarter, with the score 0-0, he started on a sweep, then pulled up and threw a pass that went for a touchdown. It was the only score of the game.”

Cannon, who went on to play for the Houston Oilers, Oakland Raiders, and Kansas City Chiefs was held to only 51 yards rushing in the game by Clemson’s defense.

“We outplayed them in a lot of categories,” recalled Wagner.

When examining the game statistics, one might indeed think the game outcome reversed, as Clemson led in first downs (12 to 9), rushing yards (168 to 114), and had less penalty yardage (20 to 35).

Wagner also recalled LSU’s unique, three-platoon system, implemented by Dietzel to circumvent the NCAA’s substitution rules of the era, which allowed a player to re-enter only twice per quarter.

“They had a defensive team they called the ‘Chinese Bandits,’ he said. It was really a third-string platoon that they would bring in to give the regular defense a chance to rest. They had a lot of success with it all season, but we were able to run through them when they were on the field.”

And, as the current edition of the Clemson squad prepares to battle LSU on Monday, Wagner believes this year’s team has not been given the credit it is due.

“People underestimate Clemson because the ACC has been down a little this year,” he said. “And a lot of them point to the UNC game (a 21-20 win). But we’ve kept winning all along, and I believe we’ve got a good shot.”

Toby Thorpe is a freelance contributor to The Stanly News & Press.