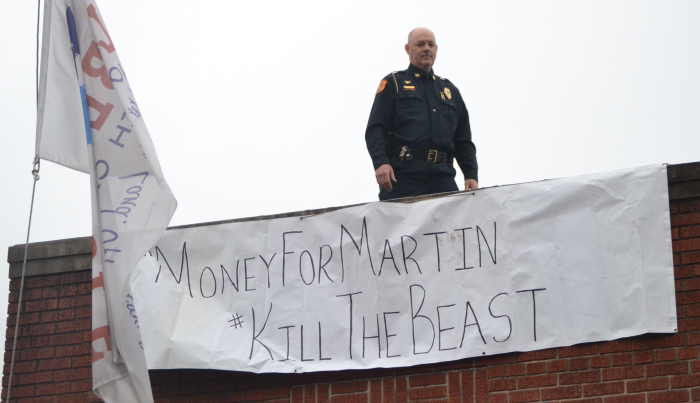 Albemarle Police Capt. David Hunt stood on top of the APD roof to raise money for his friend and former officer Mike Martin. Martin was recently diagnosed with brain cancer.

At 8 a.m. on a wet Saturday, Albemarle Police Capt. David Hunt climbed up to the roof of the Albemarle Police Department. He did so to raise money for his good friend, former APD officer Mike Martin, who was recently diagnosed with brain cancer.

The goal was to raise $1,000, which would go toward getting Martin a motorized wheelchair.

Hunt spent 21 years with Martin, who was his supervisor for many years.

“He’s just a great guy,” Hunt said. “He’s one of those guys that mentored a lot of the younger officers.” 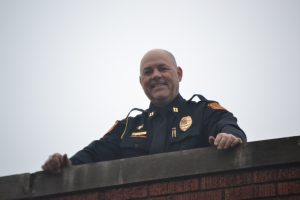 Martin was first employed by APD in 1986. He began serving the community as a school resource officer at Albemarle High School in 1988 and was the first Albemarle D.A.R.E. (Drug Abuse Resistance Education) officer. He retired from the force in 2012 and has continued to serve the community as director of security for Stanly Community College.

Albemarle Police Chief David Dulin said the force came up with the idea to help Martin earlier in the week. He said Martin was a person in the community that “a lot of people looked up to” during his time with the department and at Albemarle High.

“I have been blessed by working for the Albemarle Police Department and being trusted to help protect and educate the students of Stanly County Schools during my career,” Martin said in a written statement. “The response from the community has been the most humbling experience of my blessed life.”

He said his ultimate goal is to “kill this beast in my brain and get back to work.”

A banner that hung on the roof read “#MoneyForMartin #KillTheBeast.”

A small group of people, including Dulin, Albemarle Mayor Ronnie Michael and Albemarle City Council members Chris Bramlett, Martha Hughes and Bill Aldridge, came out to show their support for the event. 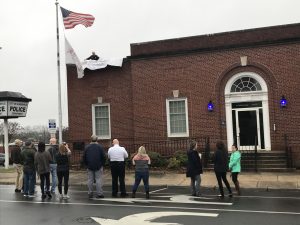 A crowd offers support for Hunt as he raises money for friend Mike Martin.

The crowd was playfully goading Hunt to entertain them while he was on the roof, including asking him to tell a joke or to sing.

“It’s kind of like being at the zoo looking at an exhibit,” Aldridge joked to Hunt.

Numerous people also stopped by to offer donations. Bramlett said he would match the first $1,000 that was raised.

Several people were able to watch the event thanks to a Facebook Live video hosted by school resource officer Kim Cook.

“You were a big inspiration to me when I was growing up,” said Baltimore Ravens player and former Albemarle High standout R.J. Prince, who was watching the event on the Facebook stream.

Martin was also able to watch Hunt on the roof, thanks to his good friend Alissa Rucki, a Stanly County Schools social worker who worked with him at Albemarle High School. She called Martin her best friend.

After about an hour, Dulin announced that a total of $4,385 was raised (including the $1,000 Bramlett pledged) and so Hunt came down.

There is also a GoFundMe page created by the APD for Martin that as of Saturday afternoon had raised almost $6,100.

“Thank you, brother,” Martin said to Hunt on the video chat.

“Love you, too,” Martin replied.

To donate, go to gofundme.com and search “Money for Martin.”