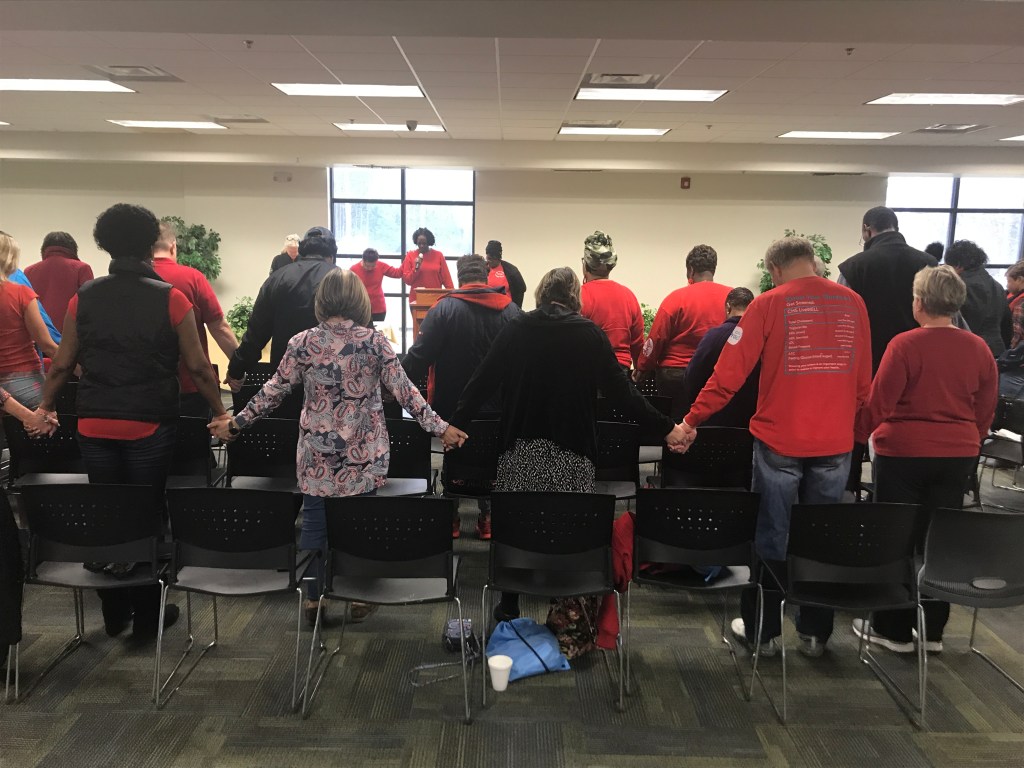 With Kool and the Gang’s “Celebration” and Chaka Khan’s “I’m Every Woman” playing throughout the E.E. Waddell Center Saturday morning for the second annual Stanly County Women’s March, a general sense of buoyancy and happiness pervaded the room as people from across the county came together to make their voices heard.

Originally started last January by Tomeika Baldwin, who was inspired by marches she attended in Charlotte and Raleigh, the march is an event for women — and men — to come together to promote inclusivity and discuss topics affecting the community such as the importance of education and leading a healthy life.

Though Baldwin couldn’t make it to this year’s march, she spent many meetings last year organizing the event with the Women’s March committee, including Theresa Lanning.

“This wouldn’t have happened without Tomeika Baldwin,” Lanning said.

The program started at 9 a.m., where informational booths were set up for the community. Various groups from the county, including the Health Department, Esther House, Monarch and North Carolina Cooperative Extension, were in attendance to speak with people about issues.

“An educated community is a more proactive community and a safer community,” said Laura Harbeson, founder and lead therapist at Creative Counseling & Learning Solutions who shared a booth with Donna Miller, executive director of Esther House. “I think that by having everyone get together and to be able to educate one another about the services that are here and about topics that are really relevant, then we can be less vulnerable as a community and be stronger.”

Many men were also at the event, including Albemarle City Councilman Dexter Townsend and Dr. Eric Johnsen.

“We’re all in this world together and we’ve all got to work together,” Johnsen said.

At 10 a.m., the speakers talked about their respective topics.

Dr. Rikki Baldwin, an assistant principal for Montgomery County Schools, spoke about the importance of education. She mentioned that women are still lacking in STEM (Science, Technology, Engineering, Mathematics) education. She also said many women do not make the same amount of money as their male counterparts for the same job.

“Our goal is to create a sense of equity and fairness to bring about true change,” Baldwin said, adding that the best way to support each other is to encourage everyone to be involved in the education process.

Harbeson spoke about human trafficking, which includes both labor and sex trafficking, and how it occurs in Stanly.

She said the average age for a victim is 13 years old. The most common methods of trafficking victims are by force, fraud and coercion. Harbeson told parents to be mindful about what their children put out via social media.

“If you see something that doesn’t make sense, report it,” she said.

Miller spoke about domestic violence and told the crowd that from January to December of last year, Esther House served 352 women, men and children. She said one in four women are abused or have been abused around the world and every six seconds a woman is abused in the United States.

“We weren’t put here to be abused and no one should have to live that way,” Miller said. “Women should have the right to live violence free.”

Miller emphasized the importance of smiling and acknowledging people throughout the day. She said when you acknowledge another person and really take time to see them, “you could very well be the one person that saves their life.”

Trina Fonville, who represents Senior Benefits Center, spoke about the importance of people knowing their Medicare and Medicaid benefits.

“Please be diligent and pay attention to your health plan,” she said.

Due to inclement weather, the crowd danced and marched around the Waddell Center instead of walking to the courthouse.

“Just because it’s raining outside it won’t rain on our parade,” Sharika Watkins, master of ceremonies for the event, said.

Many people waved their signs — which included “We Will Vote” and “Trans Women are Women” — and took pictures together during the march.

After the marching, Dr. Jenny Hinson, a doctor at Atrium Health Stanly, spoke about the importance of women coming together in solidarity to support one another.

“I march for empowering and liberating women and as a physician, I march for healthcare for every woman, not just for those that can afford it,” she said.

Hinson mentioned there is no shame in people seeking help for mental illness or substance abuse and emphasized the need to get rid of stigma. She said referring to people as “addicts” or “users” or “needs to get clean” does not help and can make things worse for people.

Referring to the opioid crisis that is affecting the county, Hinson said that “weak will has nothing to do with addiction,” adding that substance abuse can alter brain chemistry.

The keynote speaker was Dr. Anita Owens-Scott, who is co-pastor at New Directions Life Ministries in Norwood. She challenged people to be their best, not simply to be good or even better. 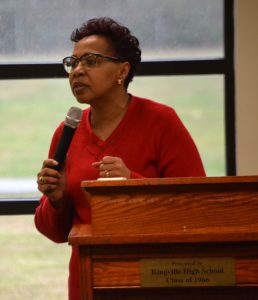 When people are at their best, they put forth maximum effort in everything they do, Owens-Scott said.

“You can’t settle because your best is waiting for you,” she said.

Owens-Scott spoke about a word that she said has the power to change people’s lives forever — no.

“That is a very powerful word when we, as women, put it in our vocabulary and actually use it,” she said.