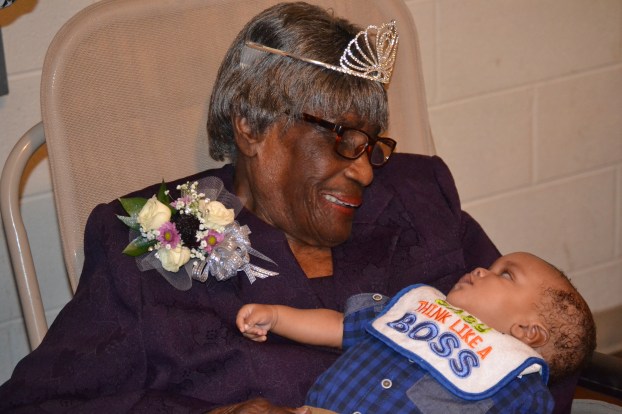 A momentous and joyous occasion occurred Saturday night as the family of Cherry Mae Covington gathered to celebrate her 100th birthday. She will officially become a centenarian on Jan. 14.

“She has always been a caregiver,” said her niece Georgette Edgerton, who helped organize the event.

Growing up, she took care of all of her younger family members. Edgerton said she thinks of Covington as her mother. 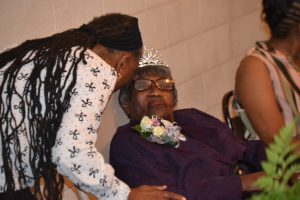 Born in 1920 in Ansonville, Covington lived in a log cabin with no running water and an outhouse.

She was a housekeeper who took care of the Bennett family, Edgerton said. Covington was responsible for taking care of the children and she also traveled with the family. When the Bennett parents died, they gave her a house in Ansonville.

Covington only had one child, but her daughter, Lillian, had 11 children.

Covington has lived in Stanly for around 20 years. She also worked at one of the textile mills in the county.

She now lives at Bethany Woods Nursing and Rehabilitation Center.

Edgerton said her favorite saying is “I am doubly blessed and I have my good mind.”

Her pastor at Cedar Hill AME Zion Church in Ansonville, James Whitaker, visits Covington the first Sunday of each month to take her Communion.

“Each time I go over there and see her is amazing,” Whitaker said. “I’ve never met a person that was 100 years old.”

Edgerton said Covington had many roles at the church — she was secretary, treasurer and was in charge of the ushers.

There were about 125 people, mostly family but a few friends in attendance Saturday at the Hillside building on Old Salisbury Road.

“We love and celebrate our one and only Aunt Cherry Mae,” great-niece Beverly Spencer said during the celebration. “She tells all of us just how blessed we are and that we are doubly smart. She lets us know how much we are loved and it always comes straight from her heart.”

Covington, who was wearing a tiara and a corsage, also said a few words.

“I have the best family in the whole wide world,” Covington said. “No one in the world has been treated as nicely as I’ve been treated.”

With Kool and the Gang’s “Celebration” and Chaka Khan’s “I’m Every Woman” playing throughout the E.E. Waddell Center Saturday morning... read more