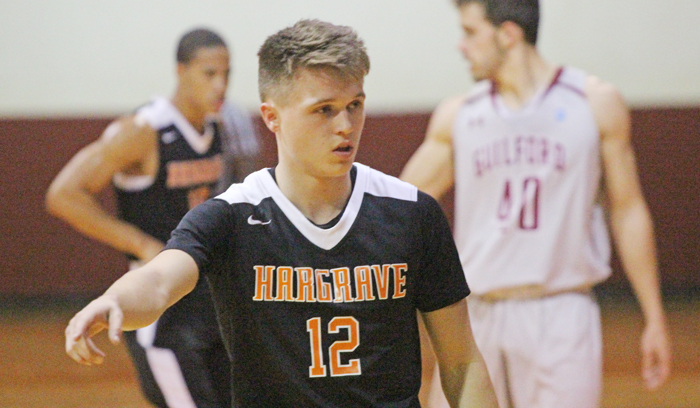 Often in his time at North Stanly, Bryson Childress was often one of the smaller players on the basketball court but his game lifted himself and his teammates to bigger heights.

He has played this season for the No. 1 ranked Hargrave Military Academy Tigers, including an 89-60 exhibition win Tuesday over the Guilford College JVs.

Childress has continued to add to his repertoire playing on a team made up of numerous NCAA Div. 1 recruits being one himself after recently verbally committing to High Point for head coach Tubby Smith.

Playing against bigger opponents starts largely from his mindset, according to Hargrave head coach Lee Martin.

“Bryson has unbelievable drive and competitiveness, the will to be good, more so then most,” Martin said.

“What compensates and overcomes some of his size is he is extremely skilled.” 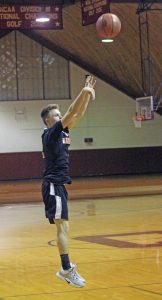 Martin said Childress also buys into the Tigers’ system and does whatever the coaching staff asks of him along with being a tough kid.

His game has evolved since North Stanly, the Hargrave coach said, as Childress helps move the ball around the offense while helping to ensnare ball handlers in the Tigers’ three-quarter court trapping defense.

Childress said he has learned how much more detailed the college game is in his time at Hargrave along with being exposed to talented teammates.

“I’m playing with nine or 10 Div. 1 players every day in practice and I’m growing every day,” Childress said. “It’s helped me to develop my skills and get better every day.”

The all-time leading scorer in Stanly basketball history, Childress knocked down a 3-pointer coming off the bench playing approximately 20 minutes in the win over Guilford but was more focused on moving the basketball and playing solid defense.

Some days, he added, he is the guys knocking down shots but others days someone else may be doing the scoring.

“It helps me to learn that I have to be facilitator, a defender with different types of players every day,” Childress said.

Improving his status in recruiting playing for the Tigers paid off with his offer from High Point to play for a coach who has the resume of Smith.

“It meant so much that someone of (Smith’s) caliber believes in me enough for me to play for him for four years at their university. I’m grateful and thankful for the opportunity,” Childress said.

During his time at North Stanly, the recruiting process was frustrating for Childress but he said he continually reinforced his belief in his ability to play Div. I basketball.

Though he still is one of the smaller players on the roster (the Tigers have three 7-foot players), having to guard against taller guards bound for high-level college programs is just another day at the office.

“When I have a 6-5 guard (to defend), that might seem big but I’ve been used to guarding (bigger guards) every day. It’s becoming easier with bigger guards to be more physical,” Childress said.

In the classroom, Childress is taking freshman-level college courses and will be a sophomore academically next season but will still have four years of NCAA eligibility.

Childress said he has formed a number of friendships with his Hargrave teammates, saying it’s helped him to grow as a person to be around players with different personalities.

Most of the Tigers’ games are more than two hours away from Stanly County, including home games in Chatham, Virginia along with road games around the country as far away as Massachusetts.

Despite the long drives, Childress said his family, including his father and former North Stanly head coach Paul Childress, often make it to his games, for which he is grateful.

Referring to the game in Greensboro at Guilford, Childress said it was great to play there because it was not too far for his family.

“It’s good my parents and grandparents can get to games,” Childress said.

For this season, Childress said he and his teammates are focused on winning a national prep championship but he takes things day by day.

“I want to get through and win a national championship with Hargrave then get to High Point and try to win a Big South championship there and make the (national) tournament,” Childress said.