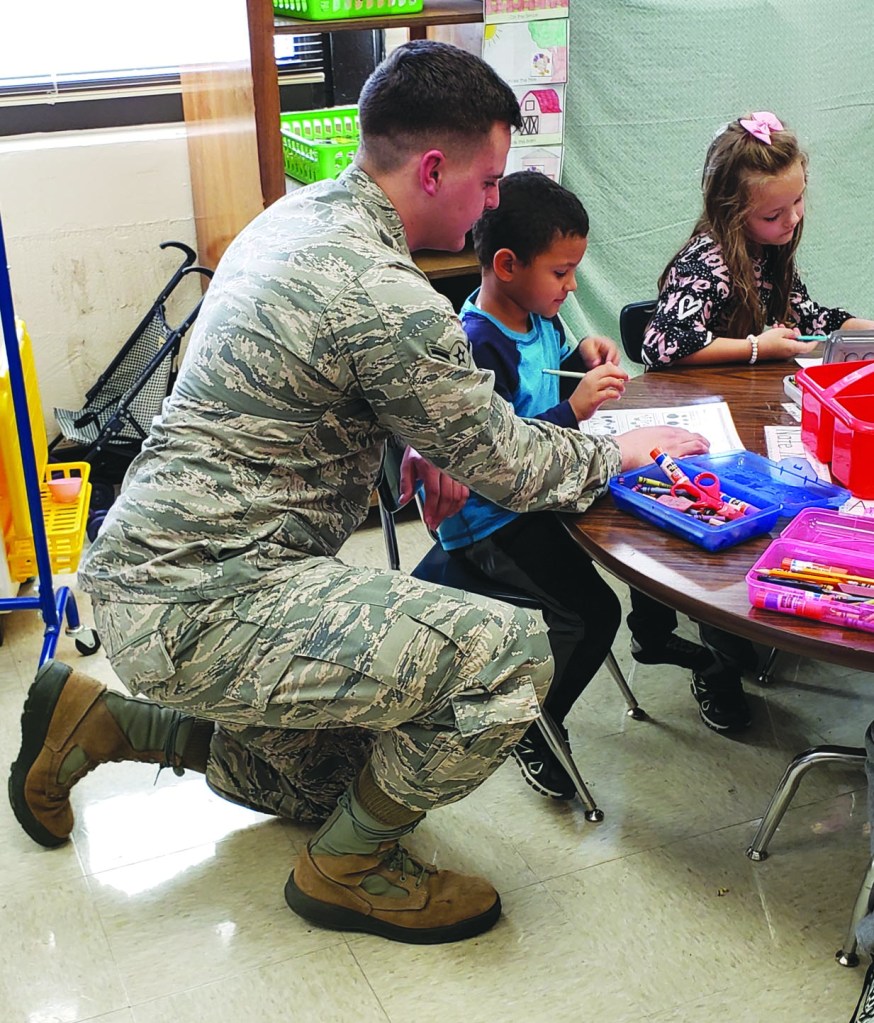 Military service members usually possess camaraderie and esprit de corps, but so do mothers. Even a full-time dedicated master sergeant must operate in a sphere beyond her military service. Master Sgt. Jacqueline Plumley, air traffic controller, goes to work in a camo uniform, and three young boys call her Mom.

Plumley’s sons attend Badin Elementary where one of her sons was a student in Keely Towne’s kindergarten classroom last year. Plumley and her husband, Master Sgt. Chase Plumley, who is also in the Air National Guard, were simultaneously deployed. She went to Ukraine for two months while he served in Iraq. Teachers and grandparents filled the gaps.

The separation of children from parents is never easy, but Towne’s experience as the child of a career military man has given her empathy for service members and their families. She understood the situation from her student’s point of view, and from his mom’s. The teacher and the master sergeant may work in different professions, but the common bond of mothering under stress drew them together.

Plumley attended Badin Elementary from fifth through eighth grade and praises her former science teacher, Fred Smith. She remembers his membership in the Army National Guard and how he influenced her decision to enter military service.

“He answered questions, and inspired interaction and being a part of the classroom,” Plumley said. “He also made you feel like you could do whatever you wanted to do. Now I’m in the Air Force and I tell planes where to go.”

Because of their experience, both women saw an opportunity to join forces in presenting other positive influences to children in the classroom. With the support of Badin Principal Damon Rhodes, Towne and Plumley made arrangements for Air National Guard members stationed in New London to volunteer as mentors at Badin.

“We want to grow the program so upper-grade classrooms can have mentors, too,” Towne said.

According to Plumley, the Air Force focuses on a concept called “whole airmanship,” which is about not only doing a job, but about being a well-rounded person.

“We believe the community is just as important as our jobs,” Plumley said. “Our service hours help airmen grow and learn responsibility. The whole airmanship concept brings attention to why we joined — so children can grow up in a free country.”

Senior Airman Ashley Pritchard has two children of her own, and she volunteers at Badin. She sees the children as the future of America. “It’s important for children to see different options and have role models. Especially as a woman, I am planting seeds in young kids’ heads,” says Pritchard.

The airmen must use their lunch break time for the school visits, and most visit monthly.

The children in her class were delighted when Airman First Class Anthony Sodano joined them in the “Turkey Wobble” dance.

Volunteers may be involved with the whole class, join with a small group of students or work with a student one-on-one, according to Towne.

The only requirement was that the airmen submit to a Stanly County Schools background check. Of course, these ANG members each have a high level of military clearance. The program began while Maj. Joe Barney was commander of the 235th Air Traffic Control Squadron. The current commander, Lt. Col. Lawrence Arnold, has given his full support as well. 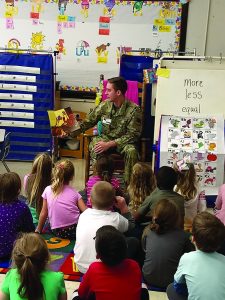 Comments from Senior Airman Patrick Tooker, and others who volunteer, show they value this opportunity.

Tooker wants to be a positive influence for the children.

“You’re under a microscope and they look up to you as a role model,” he said. “It also teaches us to act in a professional manner.”

Airman First Class Joseph Stafford, an alumni of Western Carolina University, is new to Badin, but he has actually been a classroom teacher and wants to seize this opportunity to step back into the classroom.

“Kids don’t get read to every night in every home,” Plumley said.
She admits busy families like hers struggle to make time.

“As members of the ANG, we care for our local community and for the teachers, too. We still have to man the tower, but we want to reach out,” Plumley said.

The effort is appreciated especially by teachers.

“Children see other people besides their parents and teachers coming in,” Towne sid. “They’re amazed and so excited when they see someone dressed in camo come into their classroom — someone who cares enough to come and read a book with them.”

Of course, the classroom teacher enjoys the support, says Towne, “and we can show off the military in a positive way.”