Peter Asciutto is likely one of the more visible people in the county.

Besides running his Vac & Dash store in downtown Albemarle, he is active on Facebook, where he posts about local issues, and he often attends and speaks at official meetings throughout the county.

The 61-year-old Asciutto recently filed to run as a Republican candidate for County Commissioner District 5. He will face Republican incumbent Ashley Morgan and Republican challenger Leon Warren in the March primary. 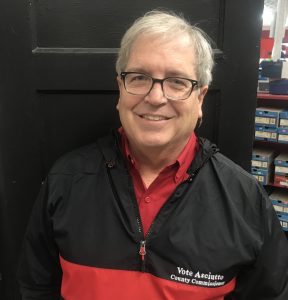 Peter Asciutto is running as a Republican candidate for County Commissioner District 5.

Originally from New York, Asciutto grew up in Sebring, Fla. He graduated from Troy State University in Alabama with a bachelor’s degree in social sciences.

He arrived in Albemarle in 1998 and has been a fixture in the community since. He opened Vac & Dash in 2004. He has a son Gregory, who is a teacher in Charlotte-Mecklenburg Schools.

Aside from his business, Asciutto also organizes running events throughout the year and was one of the original members that helped create the Uwharrie Running Club in 2005.

Asciutto previously served as a county commissioner from 2012 to 2016.

During his tenure, he said the commissioners accomplished many things including bringing a settlement with Alcoa over the relicensing of the dams; passing a new animal control ordinance; helping expand the Stanly County Agri-Civic Center lobby; and working with the City of Albemarle to move the Stanly County Museum from the Five Points area to its current downtown location.

Asciutto decided to run for office after witnessing the county commissioners attempting what he calls various “power grabs” over the municipalities in the past four years. These attempts include commissioners trying to change the way sales tax dollars were distributed and supporting a bill introduced in the N.C. General Assembly that required Stanly municipalities to get approval from commissioners when they worked with government entities outside the county.

“You don’t do these power grabs and expect to have good working relationships,” Asciutto said.

One of his biggest criticisms with the current commissioners is the re-election of Morgan as vice chairman despite several arrests over the years. He said one reason he decided to run was to unseat Morgan.

“We have 63,000 residents, we can do better with the people representing us,” Asciutto said.

He has several ideas about what he would want to do to help the county. His ideas include:

• Budgeting between $25,000 to $50,000 a year to develop a parks and recreation grant fund that would go to different municipalities to help with their capital needs.

• Extending the sidewalk from Misenheimer to Richfield. He says there is roughly half a mile gap where the sidewalk stops and people are often walking in a ditch. “I know it might not be the biggest priority in the world, but for the people up in the north end of the county, it’s important to have it,” Asciutto said.

• Continuing to work in different county departments and sharing what he learns.

• Working with the school board to make sure funds are utilized properly while also updating and repairing schools. He cited a facilities report shown to commissioners last year that revealed the total facility needs for Stanly County Schools over 10 years would cost as much as $40 million.

“If you want to live in a better community, you need to give back to the community to help make it better,” Asciutto said.

Though his business has donated more than $150,000 to nonprofits and charities over the years, he said there’s only so much private citizens can do compared to those in elected office.

“I just love Stanly County, I love this area,” he said.