ELECTION 2020 PRIMARY: With an eye to the future, Efird runs for county commissioner

Born in Albemarle, Efird, 58, grew up and still lives in Locust, where he has established roots and has spent the majority of his adult life working in local government. He said his ancestors, as far back as the 1700s, have lived in the Locust area.

“At one time, I knew everybody in Locust,” Efird said, adding that he even knew where they lived in the city. 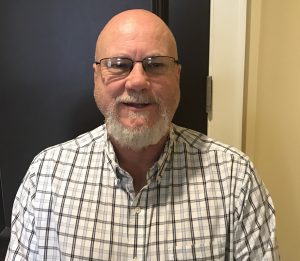 A graduate of West Stanly High School, Efird spent eight years with the North Carolina Air National Guard in Badin, achieving the rank of staff sergeant before being honorably discharged in 1989.

He has been married to his high school sweetheart Tracy Furr Efird for 40 years.

After his military service, Efird served on the Locust Planning and Zoning Board and the Board of Adjustments. His first real leadership opportunity came when he ran for and was elected mayor in 2009. During his time as mayor, which lasted until 2012, the government center was constructed in Locust Town Center. He has been the city’s planning director since 2012.

“I feel like I’ve had a little bit of a hand in everything that’s gone on in Locust since 1990,” Efird said, including the expansion of N.C. Highway 24-27 to four lanes and the construction of Locust Town Center and Walmart.

From 2014 to 2018, Efird served for District 1 on the county commission. He learned about the county budgeting process, how the school system functions and the importance of the other county departments and how they work with each other.

Efird said he was the first commissioner to serve from Locust since Hazel Efird during the 1970s. He said it’s critical that members of the board come from different parts of the county.

People “just sort of stick to their regions,” he said.

Some of the board’s accomplishments during his tenure include purchasing the wastewater sewer treatment plant from Oakboro, establishing emergency towers across the county and passing the quarter-cent sales tax. Efird also helped bring the West Stanly Senior Center to Locust.

Efird filed to run again for Stanly County Commissioner At-Large because he wants to help Stanly County grow and move into the future. His biggest priorities are education, jobs and infrastructure. He said more jobs need to be created to keep young people from leaving the county for more prosperous regions once they graduate college. He also wants to help bring in more broadband internet connectivity to the rural areas of the county.

“We need those kids to come back, but they’ve got to come back for good-paying jobs,” he said.

“I think what Stanly County does right now will set us up for the future,” he said. “We need to keep going forward with school funding, with infrastructure funding, medical services. We need to keep the foot on the gas and set ourselves up in case there ever is another economic downfall.”

During his first stint serving as a commissioner, Efird learned that “you can’t please everybody,” but if you explain to people what is happening in the county, “they might not agree, but they will understand.”

He also learned to take a holistic view of what’s needed for the whole population of people living in the county.

In deciding who to support for county commissioner, Efird wants voters to look at his record and see what he accomplished for Locust over the past several decades.

As a planning director, Efird said he’s always looking to the future. He tries to anticipate and plan for what Locust will look like in years to come. He would like to bring that same outlook to the table while serving as commissioner.

“Stanly County is a bedroom community of Charlotte,” Efird said.

He wants to make sure the municipalities in the county have the proper resources to serve new residents.

While the county cannot control growth, it can do its best to manage it, Efird said.

Aside from his work in government, Efird has been involved in helping his community in other ways. He served as a youth baseball coach at Locust Elementary for a decade and is on the board of directors for Hospice of Stanly & the Uwharrie.

He is a co-founder of the Kerri D. Efird Memorial Scholarship, in memory of his daughter Kerri who passed away in 1999. The scholarship is awarded annually to West Stanly High seniors. Efird said $94,000 has been awarded.

What he cherishes most about working for Locust and for the county are the people he’s been able to meet and form relationships with.

Efird choked up as he recounted a conversation he had last year with Terry Blalock just before he passed away. As they were talking about politics, Blalock told him: “Don’t forget the people.”