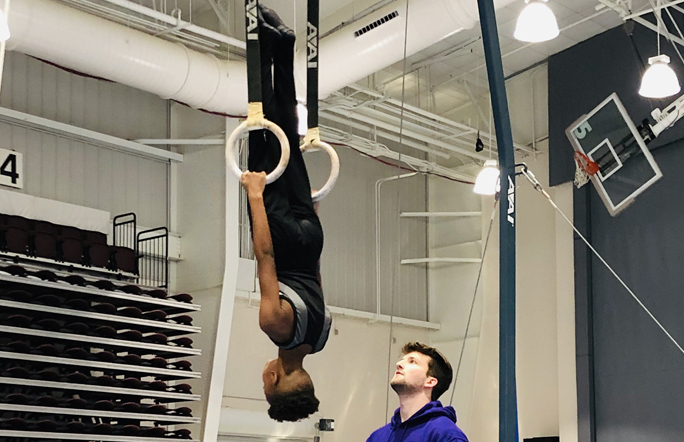 Elijah Washington competes with his routine on the rings. (Contributed)

The Stanly County Gymnastics boys team recently competed in the team’s second competition of the season at the 2020 Rocky Mount Rumble in Rocky Mount.

Gymnasts perform routines on each of the six Olympic events for men’s gymnastics: floor exercise, pommel horse, rings, vault, parallel bars, and high bar. Each individual event score is added together for the all-around score.

Evan Ferris competed in the Level 5 Division 2 competition taking first place on the floor exercise with a score of 8.8 and fifth on pommel horse with an 8.7. He also scored an 8.5 on rings and an 8.35 on vault.

Ferris placed eighth in the all-around with a score of 48.45.

McKibben had a great appearance at the meet placing first on high bar, floor exercise, vault, and parallel bars. His highest scores were a 9.1 on vault and parallel-bars. McKibben also placed first in the all-around for his age group with a score of 52.75.

The team’s next meet is at the Greensboro Gymnastics Invitational in February.