‘Idiots’ commit to tie the knot 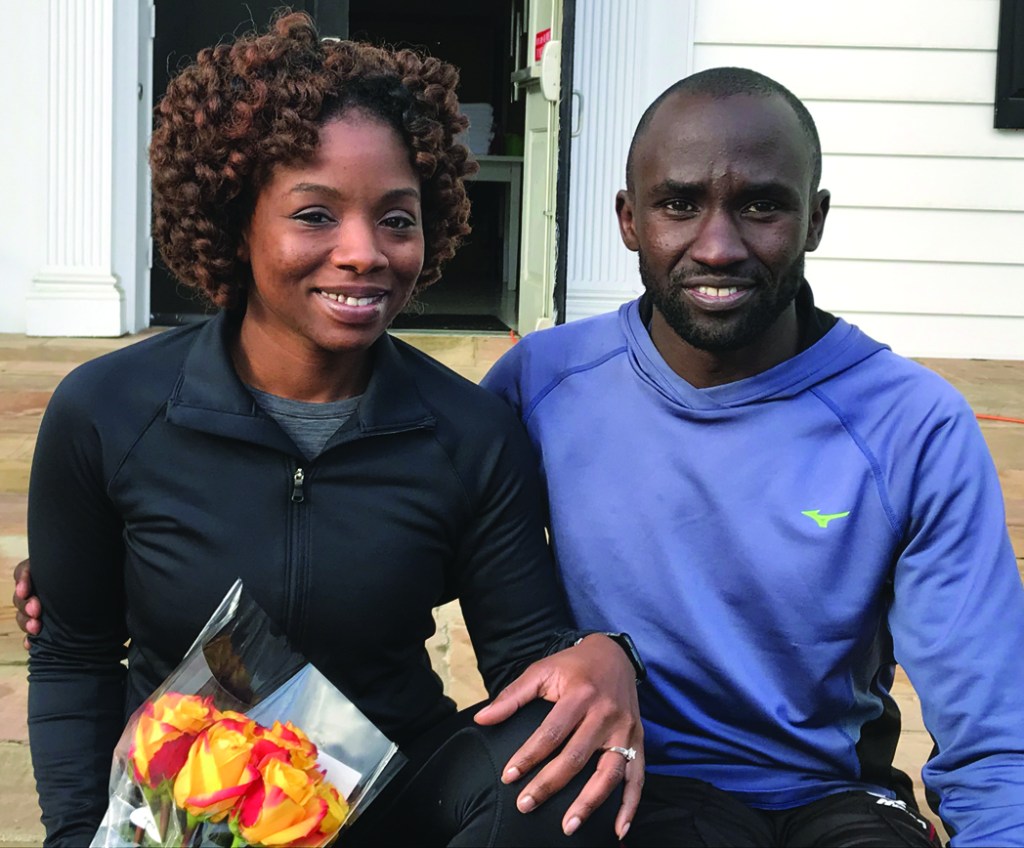 Edwin Kibowen proposed to Simeka Vaughn at the Fellowship of the Idiots run in Albemarle Saturday.

When Edwin Kibowen took a knee at the finish line and asked fellow runner Simeka Vaughn for her hand in marriage, it marked a milestone in the 18-year history of the annual Fellowship of the Idiots run in Albemarle.

“This event started in 2002, and this is our first proposal,” said Peter Asciutto of Vac and Dash, who founded the run and serves as event director. 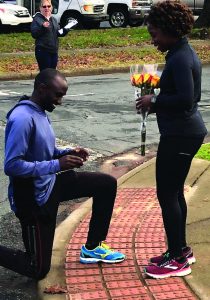 Edwin Kibowen proposes to Simeka Vaughn at the Fellowship of the Idiots run Saturday.

Although a marriage proposal at a long-distance run may seem unusual to many, it is actually a very appropriate setting for the betrothed couple.

“We met about a year ago when I agreed to help Simeka train for an upcoming marathon,” Edwin said. “And it was love at first sight.”

“It took me a little longer, though,” countered Simeka.

Despite their differing views on when the relationship moved from friendship to romance, both Edwin and Simeka agree that their mutual love of running is what brought them together.

“We would not have met otherwise,” Simeka said.

And the bond among those who enjoy running is the reason behind the event’s popularity, according to Asciutto, as records show the event having grown from five “charter idiots” in 2002 to more than 300 in 2019.

“The run is not timed, and we don’t give awards, so there is no pressure on anyone,” he said. “People come from all over to just share a good time running with friends. They can take their time at aid stations, run a pace at which they can converse as they run, and take time at the top of Morrow Mountain to enjoy the view of the sunrise.”

The event is an economic boost to the county as well.

“Of the 300-plus runners, about 90 percent were from out of town,” Asciutto said. “That means about 270 participants are visiting our restaurants and businesses, and many are staying in local hotels, motels and B-and-B’s.”

Asciutto noted that although most runners came from other North and South Carolina locations, a few came from as far away as Kentucky and Minnesota.

The local economy, however, was far from the minds of Kibowen and Vaughn as they discussed how running has enabled them to draw closer to one another.

“Running helps you see what people are really made of,” she added, while recalling an experience that proved Edwin’s devotion and care for her.

“I’ll never be as fast as he is,” said Simeka —Edwin finished first overall in Saturday’s run, “but when I cramped up in a marathon a few months ago, he slowed down and stayed with me all the way to the finish.“

“He inspires me,” she added.

Edwin cites Simeka’s never-say-die attitude as an inspiration as well.

“She never quits, no matter the challenge,” he said.

The couple, both of whom live in the Raleigh area, where Kenya native

Edwin is a fast-food delivery driver and Simeka works at Truist Bank, have yet to decide on a wedding date.

But perhaps the bigger question is where the nuptials will take place.

Maybe at the finish line of their next marathon?