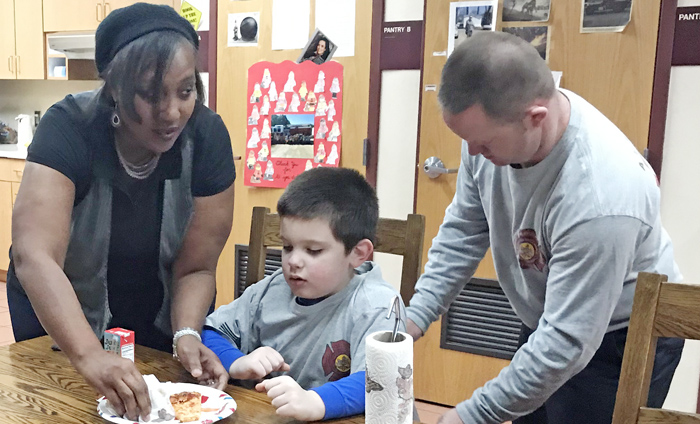 The event was the brainchild of long-term substitute Bibi Murray, who took over the class in Thanksgiving for Springer, who is out on maternity leave.

She wanted to do something special for the class, so she reached out to Albemarle Fire Administrative Assistant Stacey Griffin about setting up a social event.

Six firefighters — Battalion Chief Kenny Kendall, Travis Haywood, Daniel Isenhour, Dustin Tallent and Doug Saunders — from Shift B attended a luncheon at the school Dec. 16 where they shared a meal of curry chicken and rice, along with fried chicken, salad and baked macaroni and cheese. Sanders entertained the students with magic tricks while Haywood read them a story.

“We had fun, we laughed, we played, we read books and the kids loved it,” said Haywood.

“You would have thought we’ve known each other for years,” Murray said about the interaction between the students and firefighters.

A few weeks later, the firefighters returned the favor and invited the class to the station. Murray’s students, along with another exceptional children’s class, toured the fire station, watched a video, took pictures in front of a red fire truck and enjoyed pizza.

“For us it felt very heartwarming,” Murray said. “For them to extend the invitation back felt like, okay we were a family. They truly and genuinely enjoyed being around these kids.”

The firefighters enjoyed the time with the students as well.

“We loved doing it,” Haywood said. “We’re very passionate about spending time with kids and learning about their interests.”

He said his group of firefighters likes to give hugs and so “everyone of us was hugging the kids left and right.”

Murray is working with Griffin to try and coordinate future events between the students and firefighters, including an after school program.