Ferris will reunite with friend thanks to Dream Foundation 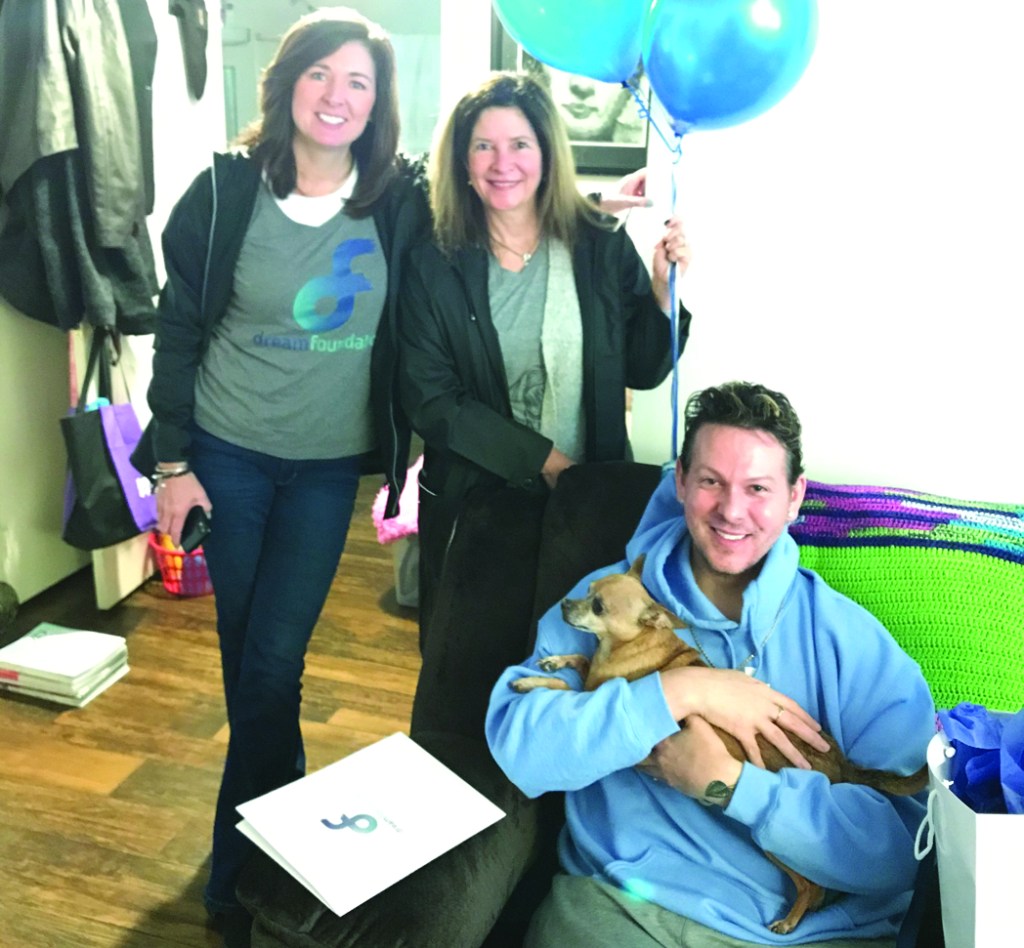 Kimberly Yingst of Dream Foundation and Christianne Coover from Genetech share details with Jonathan “Jef” Ferris and his dog Vanessa about his trip this week.

Edgewood Apartment resident Jonathan Ferris, better known as “Jef” (his initials) to his friends, was paid a visit Friday by representatives of Dream Foundation, a nonprofit organization based in Santa Barbara, Calif. which serves terminally-ill adults and their families by providing end-of-life events that offer inspiration, comfort and closure.

Ferris, afflicted with stage 4 squamous cell carcinoma, and diagnosed with a life expectancy of nine months, will be flown to Houston Thursday, courtesy of Dream Foundation, to reunite with a longtime friend with whom he became acquainted as a neighbor, and to whom he wishes to say goodbye.

Dream Foundation representatives Kimberly Yingst and Christianne Coover of Genentech, a corporate partner of Dream Foundation, delivered a festive package to Ferris at his apartment Friday, including airline tickets from Southwest Airlines, reservations for a four-night stay in Houston and travel accessories.

Also making the trip with Ferris will be Vanessa, an 8-year-old chihuahua, which he took in as a puppy when she was only a few weeks old. The two have been inseparable ever since, so Dream Foundation representatives arranged for Vanessa’s airline travel, as well as for accommodations at a pet-friendly hotel.

“She is like canine Xanax to me,” joked Ferris. “She brings a sense of calm to me when I need it…I can see God through her.”

Ferris, who learned about Dream Foundation through his social worker at Levine Cancer Institute, believes his relocation to Albemarle was a result of providential guidance.

“I’m originally from Charlotte, and my grandmother’s family was from the Badin area,” he said. “Over the years, I lived in Texas, Illinois and Louisiana before moving back here. I was looking for an affordable place to stay, and I was familiar with Albemarle, so I found a room here.”

Then, only two months after relocating to Albemarle, he was diagnosed with cancer.

“Still, I believe that God brought me here,” he said, “because my doctor’s office is just up the hill, and I’ve made so many friends here who have helped me. Also, I’m very grateful to Dr. (Raghava) Induru and his staff from Levine. I’m in the location I need to be for health care.”

After a number of rounds of chemotherapy, Jef began a treatment regimen of immunotherapy in August 2019.

“The chemo really wore me down,” he said, citing a number of side effects including nausea and hair loss. “But so far, I haven’t experienced any side effects from the immunotherapy.”

Despite a grim prognosis, Ferris maintains a positive attitude and is quick to express his thanks to the individuals and the organization making his upcoming trip possible.

“The situation could always be worse,” he said. “While this is not the kind of attention I wanted, I do want people to know about Dream Foundation and to hear about the good things they are doing…how they help the terminally ill.”

Ferris also spoke briefly of Cynthia, his friend in Houston, who he has not seen in more than six years.

“Cynthia has been a really good friend over the years,” he said. “She’s the type of person who has no filter…and I have not seen her since 2013, although we do phone and text often.

“It will be nice to take my mind off everything, see Cynthia again after all these years, and now to meet her husband. I’m looking forward to us catching up and getting to do some things I’m not able to in Albemarle.”

When asked what he had learned from his battle with cancer, and what advice he would give others, Jef’s response was short and to the point.