The Talent Company set to perform “Beauty and the Beast” 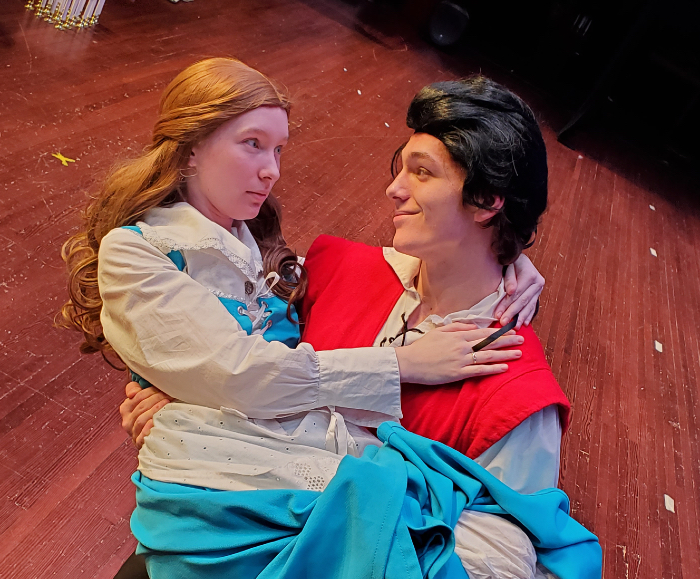 Belle (played by Blair Burris) interacts with Gaston (played by Jacob Hoffer) during practice for the Talent Company's production of "Beauty and the Beast." (Picture provided by Rebekah Ayscue)

A tale as old as time is coming to Stanly County, as the Talent Company presents its latest production “Beauty and the Beast,” which will premiere Friday at the Stanly County Agri-Civic Center.

Based on the 1991 Disney animated film, which was nominated for an Academy Award for Best Picture, the play focuses on the relationship between the Beast, a prince who is magically transformed into a monster and his servants into household objects as punishment for his arrogance, and Belle, a young woman whom he imprisons in his castle only to eventually fall in love with.

The Talent Company is a youth theater company organized to support Stanly County young people in their love of theater.

The TC’s Youth Advisory Council chose the play last year and the cast and crew have been practicing and preparing since October, according to marketing and grant coordinator Rebekah Ayscue, who also serves on the TC’s board of directors.

‘The YAC often picks huge shows that would be fun to pull off,” Ayscue said.

The play, which is directed by Heather Wilson-Bowlby, features around 40 cast members ranging from third graders to high school seniors.

The Stanly News & Press caught up with Burris, Phibbs and Hoffer and here’s what they had to say about the show.

2. How long have you been with the Talent Company? I have been participating in Talent Company shows since I was in fifth grade and this year will be my last show with them.
3. What has it been like portraying such an iconic Disney character in Belle? Belle is a wonderful character to portray, I have had such an incredible experience learning more about the character and the Disney magic she has.
4. Were you a fan of the Disney movie growing up? I was a big fan of the movie growing up. “Beauty and The Beast” was actually the first musical I ever saw as a kid. That is why I am so happy to be a part of the show now.
5. What do you hope the audiences will take away from the play? I hope the audiences learn that being different or “odd” is a good thing and that it is important to embrace who you are.
Sam Phibbs
1. How old are you and where do you live? I am 18 years old and I live in Albemarle.

2. What made you want to audition for the play? I wanted to audition for the play because I have done many shows with the Talent Company and have always had a lot of fun in doing so.
3. What has it been like portraying such an iconic Disney character in the Beast? It is a bit intimidating taking on such an iconic role. I know he is a character a lot of people hold dear to their heart. When I first got the news that I had been cast as the Beast, I immediately started to work on getting the voice right. I would watch scenes from the animated movie over and over again to try to make my interpretation of the character as accurate as possible. After that, it was up to me to really delve into developing the Beast in my own way and truly understand what he must have gone through after the spell was cast.
4. How long have you been with the Talent Company? I have been with the Talent Company for about three years. My first show with TC was “Bye Bye Birdie.”
5. Were you a fan of the Disney movie growing up? Honestly, I do not remember watching a lot of Disney movies as a kid. If I was watching a movie, it was usually “Star Wars.” I know I had watched “Beauty and the Beast” when I was younger, but I did not remember much about it until I recently watched it for this role. Having a new appreciation for it, I would say it’s definitely one of my favorites.
6. What do you hope the audiences will take away from the play? I hope the audience will leave with a lesson learned in not judging other people based on their outward appearance. We have all been created differently, all with different personalities. “Beauty and the Beast” does a good job of portraying the benefits of seeing the inner beauty in those around us.
Jacob Hoffer
1. How old are you and where do you live? I am 16 years old, and I live in Locust.
2. What made you want to audition for the play? A few of my friends from other schools had told me about the upcoming auditions back in October. I love to sing and I’ve always loved Beauty and the Beast so trying out for the show was a must.
3. What has it been like portraying such an iconic Disney villain in Gaston? It has been a very transformative experience. This is my first ever production and I’ve been method acting for the role (to get as in character as possible) and I’ve learned far more about this role than the superficial larger than life character from the movie.
4. How long have you been with the Talent Company? Not only is this my first production/partnership with Talent Company, but this is also my first official show. I’ve never performed on stage for anything more than a skit prior to this. Working with Talent Company has inspired me to pursue musical theatre because I feel personally that I’ve hit my stride.

5. Were you a fan of the Disney movie growing up? I enjoyed the movie very much as a child and me and my mother always loved the goofy arrogance of Gaston which is what inspired me to audition for the role.

6. What do you hope the audiences will take away from the play? I hope audiences will not only enjoy our expertly put together family show, but that they also learn that arrogance and pride can be your downfall (Gaston being a prime example), as well as the lesson that anyone is deserving of love and can be changed. Even a beast.