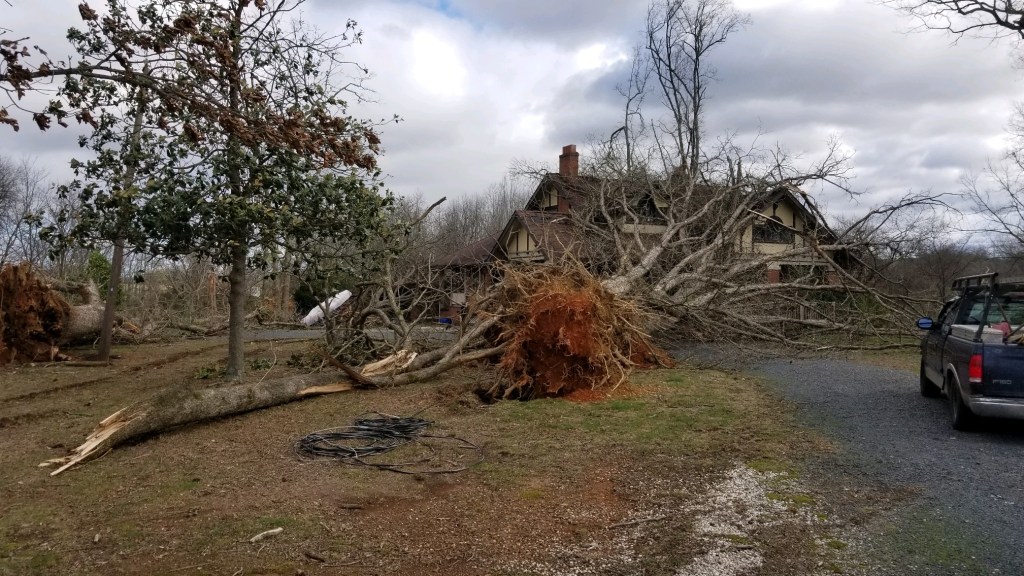 Numerous trees were uprooted at a home along N.C. Highway 73 known as the Janey House.

Several areas throughout Stanly County have been affected by heavy storms, with flooding along with fallen trees and power lines being reported. The heavy storms have affected several surrounding counties including Mecklenburg, Rowan and Cabarrus.

The city of Albemarle recently posted on Facebook that the city is experiencing approximately 4,700 power outages.

“We have the city line crews working and three contracted crews onsite or in route to assist,” the city said. “At this time, we do not have an estimated time that power will be fully restored. We will keep you updated as more information becomes available.”

Stanly County Fire Marshal Michael Roark said the majority of the storm-related damage in Albemarle was confined to the North-Northeast area, including Salisbury Avenue, Stoker Terrace, Snuggs Street and McKee Street. He said officials were called to Hilltop Street due to a woman being trapped in her home after a tree fell on the roof, but upon arrival, the woman had already gotten out of the house.

Stanly County Sheriff Jeff Crisco said many trees and power lines are down throughout the county. He said it’s because the ground is so saturated due to all of the recent rain.

Crisco said he doesn’t know of any injuries, just a lot of property damage. He has heard of several reports across the county of trees falling on houses.

The steeple perched atop Friendship Methodist Church along N.C. Highway 73 in Albemarle broke off and splintered into many pieces.

The steeple broke off Friendship Methodist Church in Albemarle due to the storm. (Picture provided by Debbie Holt)

Kiddie Kare on Pennington Road in Albemarle, which lost power, had to call parents to pick up their kids. Local firefighters have been at the scene to help. Parents couldn’t access the parking lot due to downed power lines and trees, so had to park at the church across the street.

When asked to assess the damage in Locust, City Administrator Cesar Correa, said the city was “wet, very wet.” He said a tree took down a power line on Meadow Creek Church Road but that’s the only reported issue he has heard about.

Badin Town Administrator Jay Almond said his town has luckily not been hit as bad as other parts of the county reportedly have.

“I’m surveying town streets and some alleys now and seeing the water being handled well,” he said. “There’s a lot of water but so far it looks like it’s mostly where it’s supposed to be.”

Almond continued: “I haven’t seen every street yet but I’m not finding streets blocked by trees or other debris.”

He added that he’s heard conditions elsewhere in the county are “reportedly pretty dicey so we appear to have been lucky overall so far.”

Mike Thompson, public works director in Norwood, said “We just got some local flooding on some streets but nothing major.”

Thompson said there have been no reports of downed trees and advises residents to be cautious, particularly near creeks and low-lying areas.

“There’s a lot of rain coming down, but hopefully the creeks will take care of it,” he’s said. “The problem is the ground was already saturated, so that’s what we’re concerned about.”

Hope Miller, administrative assistant for Stanly County Schools, said the school system is focusing on getting children safely home. She said a handful of schools do not have power, and several buildings have reported trees or branches down along with standing water.

“We have not been given an ETA on restoring the power to those facilities,” Miller said.

Superintendent Dr. Jeff James said the school system has been in communication with local emergency management since 10 a.m. SCS initially was going to send students home two hours early, but thanks to a tornado warning at noon, the students and staff have remained at the schools.

James said SCS and surrounding school districts started sending students home around 1:45 p.m. He said power is out at several schools but no reported damage.

The school system’s website recently posted that it will need to reevaluate the safety of its buildings and bus routes over the next several hours.

SCS added: “We will continue to be in contact with local emergency management officials. A decision about scheduling for Friday will be announced by 8 PM this evening. We will communicate updates through school messenger, district website and Facebook.”

Stanly Community College closed for the day, according to one of its social media posts, and said it would reopen tomorrow.

Misenheimer police officer M.E. Flanagan drove around the village and said there is “no damage of consequence. We are fortunate up here in that we haven’t had anything impassable or trees down.”

Chris Miller contributed to the article.