With 18 years of experience as a prosecutor, Patrick Nadolski believes his next step in public service would be best served in the position of Superior Court Judge.

As such, the Guilford County native and Mt. Gilead resident has filed for the newly-created seat for North Carolina Judicial District 20-A, which encompasses Stanly and Montgomery counties.

“I’ve dedicated my professional life to public service,” said Nadolski. “I served in the U.S. Army, and since finishing law school, I’ve served as a prosecutor. The best way for me to continue to serve the people of Stanly and Montgomery counties is as a Superior Court Judge.” 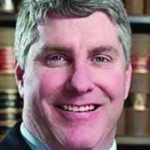 A graduate of UNC-Charlotte and the University of Mississippi School of Law, Nadolski began his career in North Carolina Prosecutorial District 20, which encompasses Stanly, Montgomery, Anson and Richmond counties.

He moved to a similar position in Alamance County in 2006 before being appointed to the vacant District Attorney position there in 2009. Following his service as DA, he moved to Mt. Gilead, where he has served as an Assistant District Attorney in Montgomery County since.
Nadolski believes his experience as a prosecutor has prepared him for the bench.

“I am intimately aware of the current issues and problems facing our communities,” he said, “and I will continue to apply the leadership and thoughtful decision making I’ve demonstrated throughout my professional career.”

As a political conservative, Nadolski believes individual freedoms must be tempered with personal responsibility, and says if he is successful in his run for judge, this will be evident in his judicial reasoning.

“I am a conservative, and as a judge I will be true to that philosophy,” he said.

But, as a judge, Nadolski also added that he understands his position as an interpreter of the laws as developed by the legislative branch.

“I will interpret the laws as they are written, and will uphold and support the Constitution,” Nadolski said. “I will not legislate from the bench.”

Nadolski believes his courtroom experience with jury trials is what sets him apart from his opponent, Scott Dunn.

“I have made my mark in the courtroom, and I have thousands of hours of Superior Court litigation experience in front of juries, including death penalty murder cases. My opponent’s jury trial experience pales in comparison,” he said. “A judge should have significant death penalty trial experience because it is the most serious and consequential matter that a superior court judge hears.”

He has three children, has ushered and served as a Sunday school teacher and enjoys participating with his son’s Boy Scout troop and watching his children participate in youth soccer, swimming and tennis.