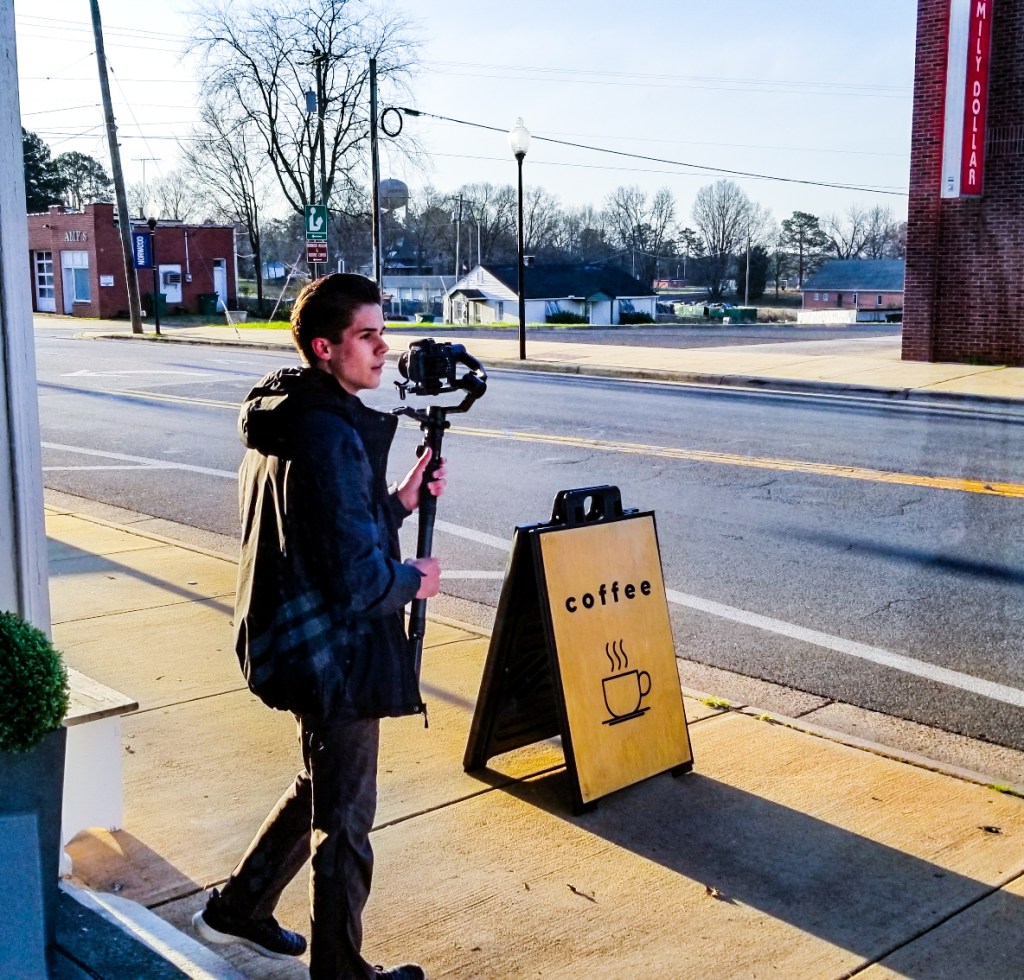 Evan DiDio with his camera outside of Reservoir Coffee in downtown Norwood. (Picture provided by Evan DiDio)

Residents from Norwood have entered the town into HGTV’s “Home Town Takeover” contest to be featured in a six-part series that will air in 2021. Albemarle and Mount Gilead have also made videos.

Instead of a single house getting a renovation, which is typical for many shows, Ben and Erin Napier, hosts of HGTV’s renovations show “Home Town,” will renovate a town of less than 40,000. The town will see the revitalization of several homes, as well as public spaces like parks, diners or restaurants and outdoor recreation areas.

After hearing about the contest through social media, residents Jennifer McSwain and Robin Davis decided to submit a video about Norwood after a January community meeting.

They were put in contact with Evan DiDio, a 16-year-old Albemarle resident who produces videos and has his own YouTube channel. He decided to make the video for free. He saw it as a good opportunity to showcase and market his technical skills.

“My focus is on building my portfolio,” he said, “so I wanted to do this for free just to show people what I can do.”

“This young man had everything planned out,” McSwain said of when she and Davis first met him. “All I had to do was find the people for the testimonies.”

The video, which lasts five minutes and features testimonials from several residents about what makes the town special, begins with footage of Lake Tillery before transitioning to aerial footage of the downtown filmed with the help of a drone. Many of the resident testimonials were filmed at 110 Main Mercantile in downtown Norwood.

“If I could say one thing to HGTV: you guys have the resources, you have everything at your tips to come bring this community alive,” Rodney Foreman, a third-generation textile owner with Uwharrie Knits Inc., said in the video. “When you come down here and you feel the heartbeat of this community and you meet these local people, you’re not just going to be renovating a local building, you’re going to breathe life support back into a small community…”

Video entries closed earlier in the month and it is unclear when the winner will be announced. Judges are considering aspects of the towns that make them “special, fascinating, historic or unique,” like vintage period architecture, destinations or a classic main street, according to information from HGTV’s website. 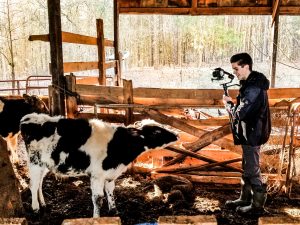 Evan DiDio films several cows at a local farm as part of his video about Norwood that was submitted to HGTV. (Picture provided by Evan DiDio)

DiDio completed the filming and put the video together in about two weeks. He uploaded it to his YouTube page Feb. 8, and it has already garnered more than 9,200 views. The video has been shared on social media and a Facebook group has been created, called “Norwood HGTV Hometown Takeover Launch Party,” which has already attracted more than 1,700 people. The video will officially be introduced to the public Saturday night during the town’s Winter Wonderland event.

McSwain and Davis were blown away when they first viewed DiDio’s video.

“We were both crying because there were places (in the video) that hit all the feels — it made you laugh, it made you cry, it made you love,” McSwain said. “Whether we win or not, I think it’s something that will bring the community closer together.”