After coming close to unseating former Rep. Ken Goodman in 2018, Star resident Joey Davis is running a second time as a Republican for N.C. House of Representatives District 66 to serve as a voice for the people.

“I want the voters of Stanly County to know that with me in office, they have a voice, they will be heard and I will stand up for them and their best interests,” Davis said. 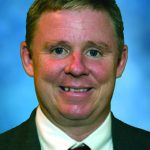 Davis, 47, is running against his primary opponent Ben Moss of Rockingham for the right to take on incumbent Rep. Scott Brewer (D-Richmond) in November. District 66 encompasses Richmond, Montgomery and a small portion of Stanly.

Davis and Moss are friends and they talk several times a month.

A native of Montgomery County, Davis’ career in politics began when he was 8 and was “the cute kid” at events as his mother ran for the register of deeds position. As a teenager, he campaigned and helped pass out literature for local politicians. Davis graduated from Wake Forest University with a bachelor’s degree in political science.

His first experience working with a political campaign occurred right out of college, when Davis worked as a campaign consultant during Sherrill Morgan’s race against Democratic incumbent Bill Hefner for the U.S. House District 8 in the mid-1990s.

Though Morgan lost the race, Davis learned about the importance of structure in a campaign and reaching across party lines, since the entire eastern half of the district at the time was solidly Democratic.

Davis has spent 30 years working with the Republican Party in Montgomery, where he served as chairman of the county GOP from 2003 to 2006. Since 2006, Davis has worked as a sales representative for Friendly Chevrolet Buick in Troy.

He decided to enter into the political arena in 2018, when he ran against incumbent Rep. Ken Goodman for House District 66. Davis lost by a little more than 1,000 votes.

The 2018 race was the ninth closest race in the N.C. House, with Goodson winning by 4.1 percent. He said it was the closest Republican challenger race that year.

What he learned from the race was the power of social media, where he could communicate directly with voters in the district, and that different online mediums allowed people to get to know Davis on a personal level that extended beyond politics.

“With more and more people getting their information off social media, being able to build a network of followers and friends and getting a message out, it’s so much more efficient than it ever has been in the past,” Davis said.

He said he’s qualified for the office because he knows how politics works, having worked as both as a political advisor and as a politician.

Davis said people ultimately need a politician they can communicate with and that they trust.

He’s a supporter of the Second Amendment. Davis has been working with the Montgomery County commissioners to pass Second Amendment sanctuary legislation. As of now, the county hasn’t passed any legislation, though there is a group that has formed in favor of the idea, Davis said.

If he were to win election, Davis would focus on working to better fund NCDOT along with school systems that reside in areas outside of large metro areas, such as Charlotte.

Davis is not married, has two nephews and three nieces and attends New Hope Baptist Church in Star.