A product of Chester, Va., the junior forward averaged 27.5 points, 9.5 rebounds, 3.0 steals, 1.0 assists and 1.0 steals per game as the Falcons posted a 2-0 record last week against USA South competition. 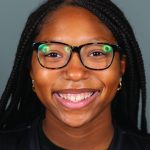 In a 79-77 win over Methodist, Bentley notched a double-double with a career-high 32 points and 12 rebounds to go along with five steals, two blocks and one assist.

In a 75-51 victory over Mary Baldwin, Bentley totaled 23 points, seven rebounds, two assists and one steal.

Bentley leads Pfeiffer in scoring at 15.1 points per game. She also ranks sixth in the USA South in that same category.

She also ranks seventh in 3-point percentage, shooting 34.6 percent from beyond the arc.

Bentley was previously named the league’s player of the week on Jan. 27.