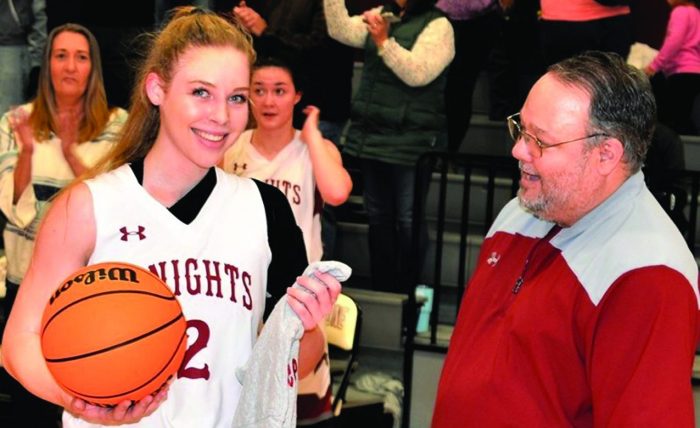 But the accomplishment came as news to the Concord native.

“I wasn’t keeping up with it, and no one told me I was getting close,” she said. “It came as a surprise.”

Fortunately, head coach Robert Stack and Gray Stone Principal Jeff Morris had been keeping up with the prolific scoring totals Werts had posted, and were ready to honor the four-year varsity starter upon achieving the milestone, presenting her with a game ball.

“I would not have been able to accomplish this without the support of my teammates and coach,” she said. “We aren’t just a team, we are a family…we encourage each other and help each other step up.”

When asked how this Gray Stone squad compares to the previous three she has been a part of, Werts again cited the kinship of the current team.

“This is definitely the closest team I’ve been a part of,” she said. “And not just from a teamwork aspect, but also in our shared faith. For example, in the past we would always come together and pray before games. Now we do so before practice, before team meals, and even at times during games, like when there is an injury…the way a family would.”

Although reaching the 1,000-point mark places her in an elite group of high school basketball players, Werts is taking a pragmatic, academics-first approach to life after high school.

“In order to play in college, I’d probably need to go to a smaller school,” she said, “but I plan to attend East Carolina University and study biomedical engineering.”

Werts credits her family, especially her dad, for helping her develop the skills that have led her to this level.

“I first started playing in youth league in Cabarrus County. And my dad helped me greatly,” she said. “We would get up early and practice before school. And I’ve played travel (AAU) basketball since the fifth grade.”

With Gray Stone in position for a high seed in the upcoming NCHSAA playoffs, Werts is certain to be a key team/family member moving into state-wide competition.