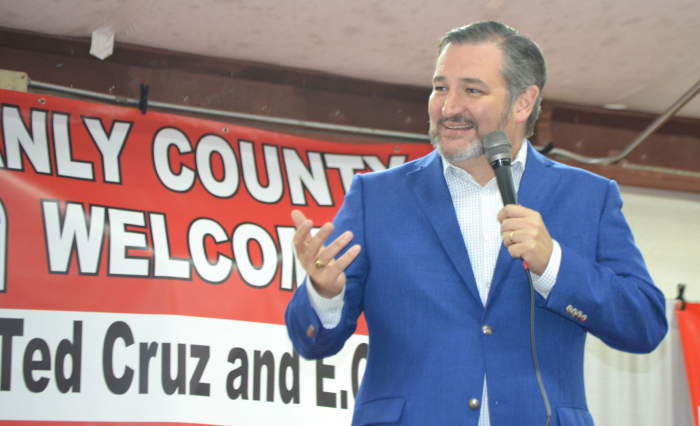 U.S. Sen. Ted Cruz of Texas spoke in front of hundreds of people at the Stanly County Fairgrounds.

It’s not every day a sitting U.S. senator and former presidential candidate comes to Stanly County, but that’s what happened Sunday afternoon when Sen. Ted Cruz of Texas spoke in front of hundreds of people at the Stanly County Fairgrounds.

Cruz, who ran for president in 2016, was in the area to campaign for his friend E.C. Sykes, a Raleigh businessman and former manufacturing CEO who is running for N.C. Secretary of State.

Cruz emphasized that North Carolina, which is often a swing state in presidential elections, will likely play a crucial role in November.

Throughout his roughly 25-minute speech, Cruz criticized Democrats on a number of different fronts, including the way they handled the impeachment of President Donald Trump and for the way some of them have embraced what Cruz referred to as socialism.

Much to the crowd’s delight, Cruz singled out and criticized high-profile Democratic politicians, including Rep. Adam Schiff of California, one of the key figures in the impeachment trial, House Speaker Nancy Pelosi of California and Sen. Bernie Sanders of Vermont, one of the leading candidates in the Democratic presidential race.

Cruz said there is a divide across the country between what he called “wild-eyed socialists…that are at the heart of national Democrats” and the “common sense conservative values” that can be seen by families and small businesses in every small town in North Carolina.

Cruz told the audience that in contrast to Democrats, who he said are “so angry and humorless,” Republicans need to be “happy warriors because we are defending principles that work, that are true and that are eternal.”

Pivoting to Sykes, Cruz mentioned that he’s the only candidate across the country running for secretary of state that he has campaigned for. Sykes served as the executive director of Cruz’s Faith and Religious Liberties Coalition during the 2016 campaign.

“E.C. is a leader who believes in this country and is willing to step forward and serve,” Cruz said, calling him a man of principle and faith who “loves his Lord.”

An N.C. State graduate, Sykes spent time as CEO of Circuit Board Assemblers and later worked as a group president and executive officer for Flextronics International, a Fortune 500 company. This is his first time running for political office.

“We need a businessman that knows when government needs to get out of the way and let businesses do what businesses do so well, create jobs,” Sykes said.

But Sykes made it clear that his business experience is not the only reason why he decided to run for office.

“While I got the business experience that’s going to be important for this role, the purpose that I’m running for this office is to stand for our values,” Sykes said, emphasizing the importance of his Christian background to his life. 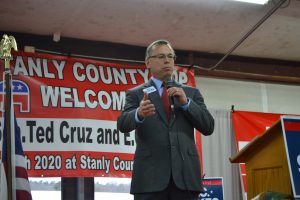 E.C. Sykes is running for N.C. Secretary of State.

After the speech, when talking to reporters, Cruz confirmed that he would be in Charlotte later in the year for the Republican National Convention.

When asked by The Stanly News and Press if he had ever been to Stanly County, Cruz wasn’t sure, but said he has been to North Carolina multiple times.

The event was organized by Stanly County Commissioner Zach Almond, a friend of Sykes. He said having events featuring prominent national Republican politicians is good for voter turnout and for lesser known candidates throughout the state like Sykes.

“It’s a great day for all us conservative people to have an opportunity to come out and talk about our values,” Sasser said about the event. “I’m just happy to be here to promote conservative values and encourage people to go vote.”

The people in attendance were happy to show their support to the Republican Party, with many wearing Trump hats and T-shirts. Several people were also selling Trump 2020 gear.

Jerel Miller, donning a Make America Great Again hat, came from Wadesboro to show his support for Cruz, referring to him as “a great person and strong conservative” who “knows the American people’s values.” 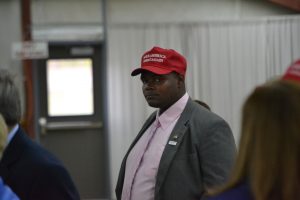 Joyce and Kyle Almond of Millingport were at the event to support Trump. They said they like Cruz and support his values, but appreciate that he also supports the president.

Board of Education candidate Rufus Lefler of Albemarle said the event was a key indicator that Republicans are energized for the primary in March and for the general election in November.

“It looks like it’s going to be a great year for the Republicans,” he said.