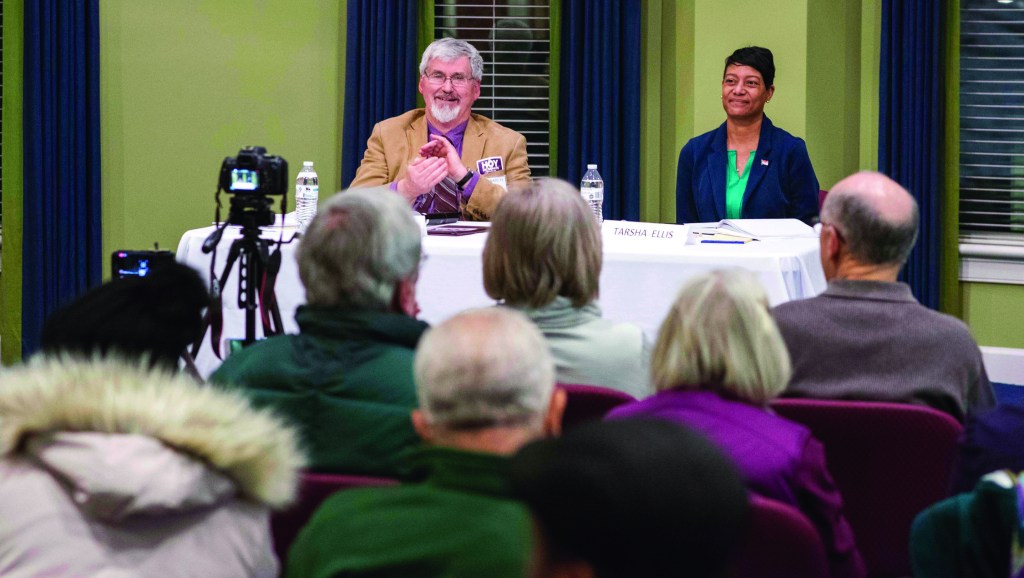 JON C. LAKEY/SALISBURY POST JON C. LAKEY/SALISBURY POST Geoffrey Hoy and Tarsha Ellis took part in a candidate forum for the upcoming primary election.. Both candidates are vying for the Senate District 33 seat that is currently held by Republican Carl Ford. District 33 includes Rowan and Stanly counties. The forum was held at the Special events Room at Trinity Oaks, Salisbury.

By Liz Moomey, for the SNAP

Democratic candidates for the District 33 state Senate seat fielded questions Thursday about how they would improve Rowan and Stanly counties if elected.

Tarsha Ellis and Geoffrey Hoy are running for the Democratic nomination and to take on incumbent Sen. Carl Ford, a Republican, in the November election.

Ellis described herself as a concerned citizen who wants to see affordable health care, meaningful job creation and an improved education system.

Hoy said he is looking forward to the opportunity to “retire” Ford.
Moderator Kenneth Stutts asked candidates questions about poverty, Medicaid expansion and how to reach out to constituents.

Hoy said he knows about poverty from growing up on a poor farm in Minnesota that burned down.

“You grow through experiences when the community comes together,” Hoy said. “I don’t buy ‘pick yourself up from your bootstraps,’ particularly in cases around here where people may not even have boots to wear to pick themselves up.”

He said getting out of poverty doesn’t have one solution, listing associated issues as health, food, employment and workforce development issue. Hoy said it takes all levels of government working together to solve poverty.

Ellis said she is concerned about poverty, saying the median income for a family of four in Rowan County is $44,000 a year. In Stanly County, it’s $43,000 a year.

Her solution is bringing meaningful jobs to both counties, along with finding agencies to assist with food, clothing and transportation needs.

Hoy said it’s time to change policies and people who set the policies to fight the war on poverty, not start a war on the poor.

Both are in favor of Medicaid expansion and think the currently stalled state budget should include it.

Ellis said she would find a common ground to pass the budget.

Ellis said she wants to work with other senators and the N.C. House to ensure the budget is passed including important programs like Medicaid expansion.
Medicaid expansion is for the working poor, Hoy said. They are working in jobs that don’t provide health benefits and don’t make enough so they can buy health insurance through the Affordable Care Act.

He said there is a portion of the population that is in the “in between” and not being served.

“This is where people are — real live people, and we have to keep that in mind as we proceed and help cover that,” Hoy said. “And it’s less expensive in the long run.”

Ellis and Hoy also talked about how they would connect with their constituents.

Ellis said she would make herself available, especially on social media. She said she is willing to try new ideas and adapt.

Hoy said he will continue to go to town council meetings, like he has been doing during the campaign, to listen to the residents of the two counties.