With the search warrant at 546 Washington Lane, investigators seized $88,500 in U.S. currency and four firearms — one of which had a silencer and was stolen, and various ammunition, APD said. 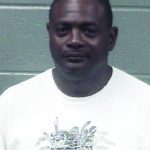 Torrence Octavius Drye, 46, was arrested for possession with intent to sale and deliver marijuana, maintaining a dwelling for illegal controlled substances, possession of drug paraphernalia and outstanding warrants. He was placed under a $46,000 secured bond. His first court appearance is March 10.

This case is still under investigation and other charges may be filed later, APD said.