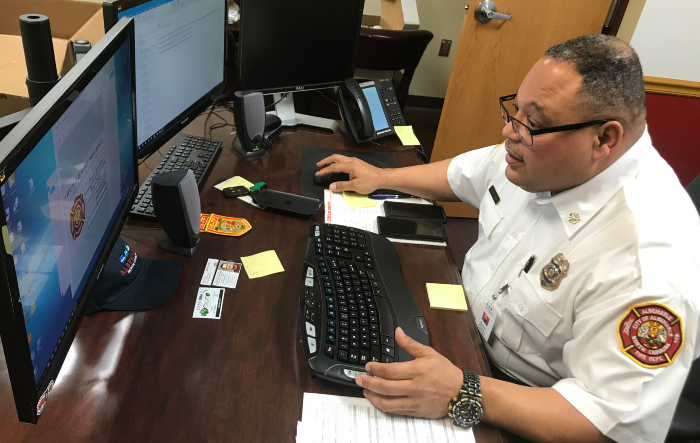 It’s also a milestone for the department. As best he knows, Brewton, 51, is the city’s first African-American fire chief. He had previously spent more than three decades with the fire department in Spartanburg, S.C.

He filled the vacancy created when Shawn Oke retired at the end of May 2019 after nine years as chief. Ernie Hiers, who previously served as Kannapolis fire chief, had been serving as interim fire chief since late September.

Brewton said everyone he’s met in the city has been very friendly, which has made the transition much easier.

“It’s almost like I grew up here because that is how welcoming they’ve been,” he said. “The people of Albemarle have spared no expense to say hello and to make me feel welcome.”

Brewton is married to his wife Denise and they have three children, Kendrick, Kenisa and Ciara, and three grandchildren. He is a graduate of Limestone College, where he double majored in business management and criminal justice.

During his interview with The Stanly News & Press, he repeatedly emphasized that firefighters — or community risk reduction officers as he calls them — are public servants. Extending beyond responding to and putting out fires, Brewton said a firefighter’s job is helping the community in whatever capacity is required.

“My ultimate goal is to have educated firefighters that are well-rounded and that serve this community to their capacity,” he said.

The importance of public service

Born in 1968 in Spartanburg, Brewton was one of four children. He said the idea of public service was instilled in him and his siblings at an early age thanks to his uncle Robert Brewton, who was one of the first African-American state Highway Patrol officers in South Carolina. He was impressed with the neatness of his uncle’s uniform, the badge he wore each day and the service he provided to the state. Robert was a sort of superhero to young Brewton. He compared his uncle to the famous American icon, the Lone Ranger.

Brewton’s siblings have also held public service jobs. His older brother James served in the military, his younger brother Bernard recently retired from Spartanburg Police Department and his sister Sharon serves as a supervisor in the Florida Department of Corrections.

He also gained a sense of structure thanks to his mother, grandmother, his church, Macedonia Missionary Baptist, and his time playing football at Spartanburg High School. (He played nose tackle and middle linebacker).

He remembers a profound piece of advice his football coach once gave him: “You’re out here playing football, but this is bigger than football, this is life out here…this is about relationships and this is about trusting the people beside you.”

As a kid, Brewton didn’t have any aspirations about becoming a firefighter because he didn’t know the profession was open to him. In the city, there were simply not many black firefighters. This lack of diversity helped crystalize in Brewton the idea that the demographics of police or fire departments should ideally mimic the demographics of the surrounding area.

“My statement is if you don’t see me, you don’t know you can be me,” Brewton said.

Becoming a servant leader in Spartanburg

After graduating high school, Brewton began his time with the city in 1988 as a sanitation service worker. It was a low-paying job, but Brewton enjoyed it and said he shared many laughs with his co-workers. Though his job was to clean trash off the ground at the city transfer station, he said it was honest work and it provided him with stability and an eventual path towards retirement.

His mother gave him advice around this time, which has stuck with him throughout his career: “It didn’t matter where you work, what matters is how you work.”

His time in the sanitation department helped him understand more about the city and how it operated and it taught him how to work with different people.

After six years in sanitation, Brewton wanted to challenge himself and so he transitioned to the Spartanburg Fire Department. Working at the department afforded him a chance to see the city in a different light than he did while at his previous job.

Brewton became more of a servant leader during his time on the force, where he spent 33 years and worked his way up to assistant fire chief. One of his biggest accomplishments during his tenure was developing community-based fire prevention practices, which involves working to prevent fires from occurring in the first place.

“The last thing we want to do as firefighters is to come to service you in adverse conditions,” Brewton said, adding that firefighters would rather spend time helping people install smoke alarms or identifying possible hazards that could lead to fires.

Brewton was also involved with a multi-week juvenile risk reduction program. It taught children with a history of engaging in dangerous fire activities the importance of fire and served as an alternative to the juvenile justice system.

His other area of focus revolved around working to diversify the department. He served several years as the department’s chief diversity officer, which he said allowed for greater chances of women and minority recruitment. When a department is diverse, it fosters more trust within the community.

He was appointed to the International Association of Fire Chief’s Human Relations Committee and to the State of South Carolina’s Diversity Task Force. These organizations are dedicated to creating equality and inclusivity for all people throughout the fire service.

During the hiring process, Brewton said he values a person’s character more than their textbook fire knowledge.

Brewton recalls a moment with Spartanburg fire chief Dr. Marion Blackwell, whom he had worked with for 10 years and refers to as a “teaching chief,” in early January when the realization he was leaving the department dawned on both men at the same time. They started crying and hugging each other. Blackwell told him he was not his subordinate, but was rather his peer.

“That was an unreal emotional moment,” Brewton said.

Looking to the future

During the first week of January, while he was still in Spartanburg, Brewton held an introductory meeting via Skype with battalion chiefs and captains. He asked them questions about the department’s biggest advantages and disadvantages and how they can better serve the community.

The answers to his questions affirmed to Brewton he had firefighters who were comfortable and capable not just fighting fires, but being public servants and visible members of the community.

Though he’s been on the job for less than two weeks, Brewton has already made an impact on the department.

“Chief Brewton is definitely well-spoken and carries himself well,” Battalion Chief Tony Russell said. “I think he’s going to bring a lot of new ideas and definitely a new dimension to the organization that we haven’t had in a long time.” 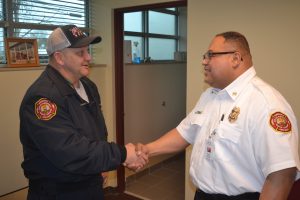 Brewton is optimistic about not just the growth of the fire department, but the city as a whole — and he wants to assist in the city’s growth.

“This community is booming,” he said, specifically citing Pfeiffer University’s new health center which is under construction in downtown Albemarle.