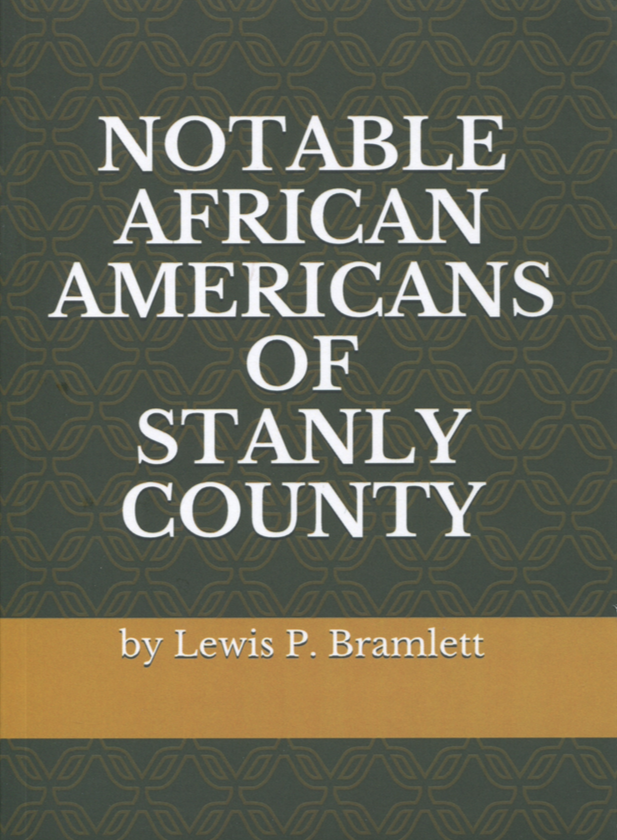 Noted local historian Lewis Bramlett has penned a new book detailing the many notable African-Americans with connections to Stanly County over the years.

Titled “Notable African Americans of Stanly County,” the book is broken down into sections including educators, those who helped integrate institutions, politicians, doctors, community activists, athletes, musicians and entertainers, and military veterans. The book was published in 2019.

The information for the book was inspired after a February 2019 presentation Bramlett gave for the Stanly County Historical Society on notable African-Americans at the E.E. Waddell Community Center.

“It was taken awhile, but I have compiled the information that was shared in that presentation into this booklet,” Bramlett wrote in the book’s preface. He wrote that several additional people have been added as well.

Here are some of the people featured in the book.

Born in 1922 in Chesnee, S.C., Waddell was hired as a math teacher at Kingville High School in 1942, after receiving his bachelor’s degree from North Carolina A&T and his doctorate from Duke University.

The following year, Waddell became one of the youngest principals in the state when he was promoted to lead Kingville High School.

He stayed at the school for the next 20 years, working to better the lives of African-Americans in the community. He helped families become homeowners and he created a vocational training program for adults to help them get jobs.

He became principal of Charlotte’s Second Ward High School in 1963 and was named assistant to the superintendent of Charlotte-Mecklenburg Schools six years later.

Waddell went on to hold numerous other administrative positions within Charlotte-Mecklenburg Schools until the he retired in 1982. He died in 1988.

Originally from Georgetown, Ohio, Noel is notable in the county for being not only the first black student to attend Pfeiffer College but also the first admitted to an all-white, four-year church-related school in the state. She applied for admission to the college in 1958.

Noel was enrolled at the school as a junior (she previously attended University of Cincinnati and North Carolina A&T)  and graduated in 1960 with a degree in business administration.

On Aug. 31, 1964, two students who had attended Kingville High School, Christine Brown and Pamela Grier, became the first students to integrate the Stanly County Schools. They both attended North Stanly High School and while there were the occasional negative comments, they both felt accepted by the other students, according to published reports.

Noel moved to Albemarle in 1949 with his wife Aline Sroufe. He was on the staff at the Stanly County Hospital and also had a clinic at the corner of Lundix and Avery streets. They lived in the city until 1960, when they relocated to Greensboro. The other doctor mentioned in the book is William Young, who was the first known black doctor in the county. He worked at the Badin Hospital during the 1920s.

Born in 1883, Wall and his brothers owned a general store and he built a number of homes in the Kingville community in addition to his contract work. He was the first black notary public in the area and one of the first to have a telephone in his home, according to a 2007 article in The Stanly News and Press.

Wall became the first known African-American in the county to run for political office when he ran for Albemarle City Council in 1951.

Originally from Salisbury, Ingram began working at the Albemarle Parks & Recreation in 1967. In the early years of integration of Albemarle City Schools, Ingram purchased a bus with his own money to provide transportation for students to their new schools, according to a 2007 Stanly News & Press article.

Ingram also sponsored youth programs and was known as an advocate and role model for youth of the South Albemarle area. He died in 1988. Due to his commitment to helping young people, the now closed South Albemarle Park was renamed Roosevelt Ingram Park in 1991.

Broadway was from Oakboro and attended West Stanly High School where he played football. He later played at the University of North Carolina at Chapel Hill.

After serving as an assistant football coach for numerous college teams over the years, in 2003 Broadway became head coach at North Carolina Central. He later served as head coach at both Grambling State and North Carolina A&T. He won the college football national championship at each of the three schools.

Born in Badin in 1926, Donaldson began playing clarinet at the age of 9. He began playing alto saxophone while serving in the Navy in the 1940s.

After his time in the military, he continued playing in his home state before moving to New York in 1950, where he played in clubs in Harlem.

Having collaborated with numerous jazz legends such as Thelonious Monk and Milt Jackson, Donaldson was inducted into the N.C. Music Hall of Fame in 2012.

Other musicians and entertainers include the jazz trombonist Clyde Bernhardt and the T.V. personality Star Jones.

Copies of the book are available at the Stanly County Museum in downtown Albemarle for $5.