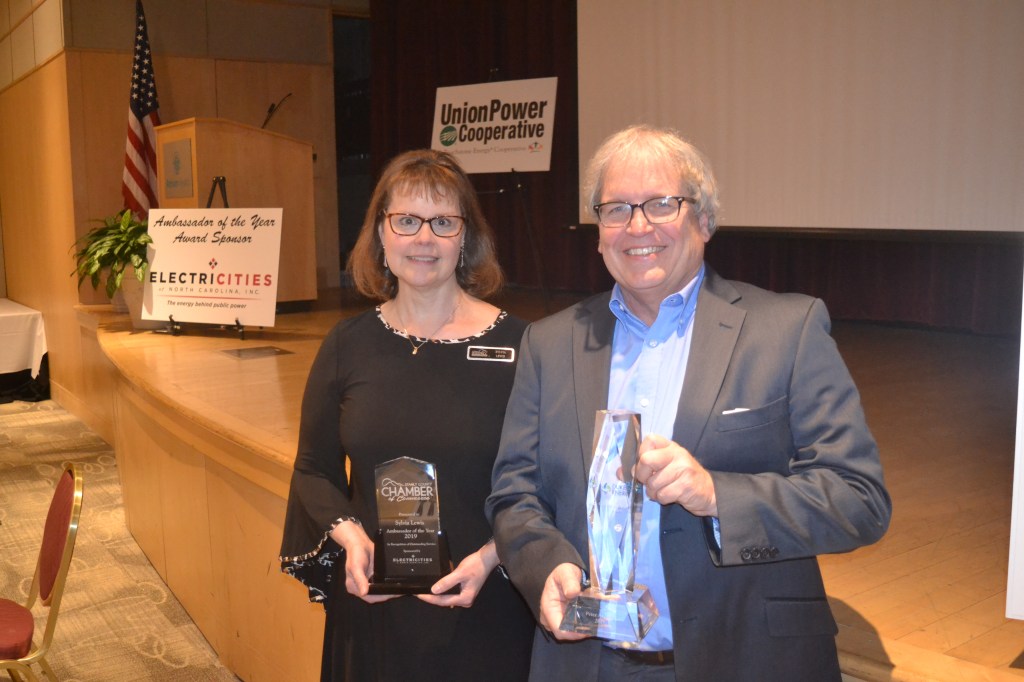 Hundreds of people from around the county gathered Wednesday at Atrium Health Stanly for the Stanly County Chamber of Commerce’s annual meeting, where the 2019 Ambassador and Citizen of the Year were celebrated.

“It’s our biggest event of the year as far as getting the community out,” said Chamber President and CEO Sandy Selvy-Mullis of the annual meeting.

Peter Asciutto, owner of Vac & Dash, was honored as the 24th Citizen of the Year.

During his speech, he joked that Vac & Dash is always open during the week, even during snow days, when almost all other businesses are closed.

“I gotta keep my speech short so I can get back and have them open the store,” he said about his staff, who were all present at the event.

In order to make a difference, Ascuitto said, people simply need to invest in their community, which could be as simple as buying barbecue tickets or going to support the Uwharrie Players or The Talent Company.

“There’s so much you can do to spread the word about good things locally,” Asciutto said.

Asciutto spoke about the importance of public service, saying he never forgot as a Little League Baseball player in Sebring, Fla. when a local company, which sponsored the team, gave him and his teammates windbreakers.

He never forgot the act of kindness and once he came to Albemarle and opened his store, Asciutto also sponsored local baseball teams — and gave them hoodies.

Asciutto noted the only honor better than receiving the Citizen of the Year award would be if in the future “some guy or girl is receiving an award similar to this and they tell about when they were kids in Albemarle playing for a soccer team sponsored by Vac & Dash and an old guy with glasses and gray hair with a name they can’t pronounce came to them and gave them the hoodies and said thanks for playing.”

Sylvia Lewis, who is director for career technologies as well as a networking instructor at Stanly Community College, received the Ambassador of the Year award for the second year in a row. She said she was “honored, but truly stunned” when she found out she was chosen again.

“I work with the greatest group of ambassadors and any one of them is just as equally as deserving of this as I am,” Lewis said.

The guest speaker for the event was Kenny Flowers assistant secretary for rural economic development for the N.C. Department of Commerce and an Anson county native. In his role, Flowers provides guidance for the department in its efforts to support rural communities and help foster rural prosperity, especially in terms of economic development.

He mentioned for fiscal year 2019, the department was awarded more than $119 million in grants for rural communities that supported more than 3,000 jobs and 183 projects.

“I see a legacy of success and commitment in this room and the good things that you guys are doing around Stanly County and for your communities is important and it’s noticed,” Flowers said.